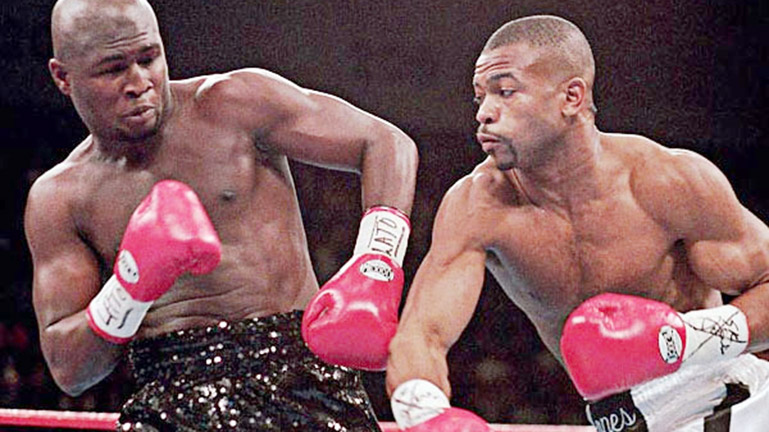 1. WITH hindsight, James Toney’s plans to invade the heavyweight division, voiced in the lead-up to his super-middleweight showdown with Roy Jones Jnr, were not the most promising. “Get me Michael Moorer, I’ll beat him too,” he cried. Jones, meanwhile, declared he would drop back down to 160lbs – where he was champ – once he had dealt with Toney at the MGM Grand in Las Vegas on November 18, 1994.

2. TONEY, the IBF champion, arrived in Sin City a week before the showdown. Prior to that he had been preparing at Mickey Rourke’s Outlaw Gym in Hollywood – reportedly weighing 207lbs when he began training – while Jones honed his body inside the Great Gorge Spa Resort in New Jersey. From there Jones said: “I’m fine. I’m gonna win the fight. I go about my own business and concentrate on being the best I can be.”

3. “LIGHTS OUT” was typically confident, angry, amusing and disrespectful beforehand. “Jones is sayin’ I got dog in me and I ain’t playin’. It’s not personal, it’s business. His showboating don’t bother me either – let him try it! My confidence is always high. I’m training like a madman. I’m goin’ to knock the boy out! I never ducked nobody. I’ve fought in three weight divisions and on November 18 Jones will be in with a real fighter.”

4. BOTH Jones and Toney turned down pre-arranged purses beforehand, $2 million and $2.5 million respectively, and instead chose to take a share of the pay-per-view money. TVKO were selling the show at $29.95 and Toney was to make 45 per cent, compared to Jones’ 35. It was later reported the event sold around 300,000 buys, equating to just shy of $9 million. If all figures are correct, the fighters were right to snub the original offers.

5. TONEY, being champion, entered the ring last and walked straight over to Jones and glowered at him. The menace and 6-5 favourite started the quicker, but within two minutes of the opening bell, it was Jones who had taken control with his speed of hand that seemed to surprise Toney.

6. JONES got stronger. In the third and, after preening and larking, he got serious when with a right cross. Toney was caught off-balance and went down. Embarrassed but not hurt, Toney jumped to his feet and seethed as referee Richard Steele tolled to obligatory eight count.

7. TONEY showed flashes of his brilliance, but it was mostly one-sided and Jones, after avoiding any unnecessary danger in the 12th and final round, was awarded the unanimous decision via lopsided scores of 119-108, 118-109, and 117-111.

8. “I WAS never hurt at all,” claimed Toney. “He pushed me for the knockdown. I was never hurt. I’ll be back. I want a shot at the light-heavyweight title as soon as possible.”

9. TWO days after the loss, Toney was questioned by police over an allegation that he had threatened to kill his manager, Jackie Kallen. Detroit police launched an investigation after Toney’s mother told them that her son had left the house with a gun while voicing his intention to shoot Kallen. He was soon released and no formal complaint was filed.

10. STARRING on the undercard was Oscar De La Hoya who defended his WBO lightweight title when he flattened Carl Griffith in the third round with a delightful left hand. “I caught him with my ‘45’,” said Oscar afterwards, “it’s my best shot. I’m glad the ref stopped the fight because he could have gotten seriously hurt. I was surprised he got up.”