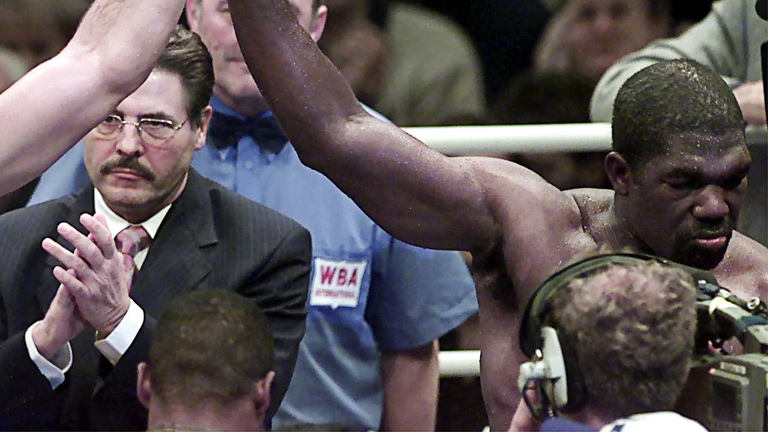 James Slater catches up with Ross Puritty, the heavyweight journeyman famous for upsetting the odds

TWENTY-three years ago today (July 28) an unheralded fighter from Phoenix, Arizona scored the first meaningful result of a pro career that, at the time, was so-so at best at 8-8 (6). Ross Puritty, seen as a tough but beatable journeyman by Tommy Morrison and his team, surprised ‘The Duke’ – who was three wins removed from his humiliating first round blast-out at the hands of Michael Bentt – and dropped him twice before holding the former WBO champion to a 10-round draw.

Before this fight, Puritty had been beaten by the likes of Cleveland Woods (in Puritty’s second pro outing) King Ipitan, Brian Nielsen, Kirk Johnson and four other less well known heavies. The Morrison fight gave Puritty his first small break (it was a good result indeed, especially when you consider how Morrison would go on to stop Razor Ruddock in a fantastic slugfest, and to challenge the great Lennox Lewis in a big fight) and for a while, the still learning, still improving heavyweight went unbeaten. Putting together a 10-fight win streak, all by stoppage against unranked, unknown opposition, “The Boss” as Puritty was known, soon found himself in the ring with more big names.

Losses to Hasim Rahman (then 12-0) and Michael Grant (then 19-0) put Puritty back in his place, yet he had taken both punchers the distance. Having carved out a niche for himself as a solid, durable opponent, the 29-year-old who had played American Football and never had an amateur career, saw to it that he was always ready to answer the call if a big fight opportunity came his way.

This happened in 1996 and again in 1997, when Puritty was matched with the huge Jorge Luis Gonzalez and then Joe Hipp. Pulling off minor upsets in both fights, Puritty stopped both names. Then, after three straight losses at the hands of Corrie Sanders, Larry Donald and Chris Byrd (all decisions), Puritty, who had already boxed all over the place (Japan, Mexico, South Africa), got a call to fight an unbeaten former Olympian named Wladimir Klitschko, in his homeland of Ukraine. The fight took place in December of 1998.

The fight wasn’t big, big news anywhere but in Ukraine at the time, and the result only became truly notable years later, when Wladimir became the great, long-reigning heavyweight king we all know him as today. But in taking away the younger Klitschko brother’s unbeaten record, Puritty drew up something of a blueprint on how to defeat the heavy-handed giant. At least Puritty showed how to defeat the young, still maturing Wladimir. Back then, as a later stoppage defeat to Lamon Brewster showed, Wladimir was susceptible to running out of gas and of losing heart. This is what happened when the stubborn and rock-chinned Puritty faced him over 15 years ago.

Wladimir was in complete control up until around the eighth round, but then, after having used so much energy in trying to get Puritty out of there, Wladimir’s tank began to visibly empty. Puritty saw the giant fade dramatically and then, in the 10th, hit the deck twice. The first time Wladimir hit the mat he had simply wilted and fallen over, a victim of exhaustion, but the second time he fell he was given a count. Puritty, sensing victory, raised both arms. It was just 18 seconds into the 11th-round when Klitschko’s trainer Fritz Sdunek climbed into the ring and stopped the fight.

All these years later, Puritty, who retired in 2007, is as modest as can be about his most famous and meaningful win.

How did he manage to defeat the then 24-0 Klitschko, a man who has not tasted defeat in over ten long years?

“I just took a good punch and I got lucky, that’s all it was!” Puritty says of his 11th-round TKO victory.

Of course, it takes more than just luck and a good chin to win a fight. Puritty had great conditioning, heart and a decent punch. Amazingly, added to his nonexistent amateur career, came the added disadvantage of a lack of sparring for his big fights.

“I didn’t get to spar for most of my fights,” Ross explains.

Having taken many bouts on short notice (Ross took the Wladimir fight with just three week’s notice given), the odds were truly stacked against the 6’3” warrior.

Aside from the win over Wladimir, Puritty also saw off both Hipp and Gonzalez, these two wins being victories he says today he is most proud of next to the upset of “Dr. Steel Hammer.”

Naturally, as was the Klitschko way, big brother Vitali stepped in to try and avenge his kid brother’s loss. For Puritty, it was another trip abroad, this time to Bayern, Germany.

Vitali, in December of 2001 sporting a 29-1 ledger (the sole loss coming via a shoulder injury-enforced TKO loss to the slick Chris Byrd), was a more relaxed fighter than his younger brother and he had more stamina. Still, the fight was no walk in the park for “Dr. Iron Fist,” who had to take a few shots before stopping Puritty on a cut right eye in the 11th round. British referee John Coyle made the decision to halt proceedings, seeing that the eye injury was a severe one. Once again, however, Puritty’s ever reliable beard had kept him upright all night.

With all fighters who are blessed with a great chin, it’s always interesting asking them who hit them the hardest. Puritty has a quick answer to such a question.

And who gave him his toughest fight?

Ross soldiered on for a further six years after his loss to Vitali, losing to Timo Hoffman, Alexander Dimitrenko and Eddie Chambers most notably. Guess what, neither guy stopped him. Indeed, the early career loss to Cleveland Woods aside (TKO 1), and stoppages caused by cuts (to Vitali and, back in Ross’ fifth pro bout, to Alexander Miroshnichenko, RTD6) Puritty was never halted in a career consisting of over 50 fights.

Walking away with a win that took place in Canada – over Carl Gathright – in October of 2007, Puritty had served his time as one of the game’s true hard men. He may not be overly familiar with anyone not of the hardcore boxing fan variety, but the man who compiled a 31-20-3(27) record certainly has the respect of those people who did see him fight. Puritty also, I’m sure, has the respect of both Klitschkos.