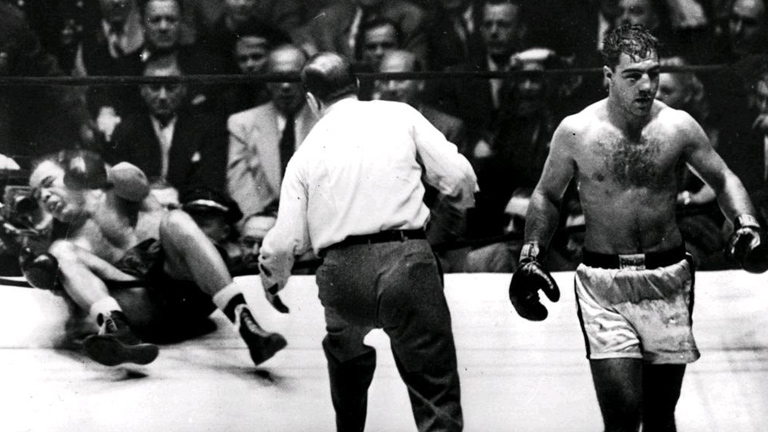 Joe Louis did not fight again after being destroyed by Rocky Marciano, writes Matt Bevan

ROCKY MARCIANO retired from boxing with a perfect 49-0 record, with 43 knockouts, and he is the only world heavyweight champion to retire from boxing undefeated. But there was always one fight, amongst the many fights of the year he was involved in, that stuck with the big punching heavyweight from Brockton, Massachusetts the most.

ON October 26, 1951, Rocky Marciano entered the ring at Madison Square Garden and looked across the ring to see his boyhood idol, “The Brown Bomber” Joe Louis staring back at him, hoping to regain the title he had once held during an illustrious career.

IT was the Brockton Blockbuster’s 38th fight and he was closing on the world title shot, but Marciano knew it would be tough from the off, with Louis’ reach giving him a huge advantage. The slugger was only 5ft 10ins and had the shortest reach of any heavyweight champion in history at 68ins.

THEN there was the weight disparity of 29lbs, with Marciano coming in at 184lbs, the equivalent of a small cruiserweight nowadays, but the power he carried was the defining factor on the night.

LOUIS was the pre-fight favourite and stood to earn $132,000 that night, whilst Marciano would take home $44,000. Both good purses, but the general public were hoping the old Brown Bomber would re-emerge that night in New York.

THE fight was huge across the whole of America, with a huge gate and TV rights being sold at big prices and through the early rounds, the two entertaining, crowd pleasing sluggers gave the fans in attendance a show.

MARCIANO and Louis threw up several thrills and spills in what was turning into a competitive fight. But as Louis’ stamina waned, Marciano relentlessly pursued him and got through in the eighth, flooring the legend with a huge left hook.

LOUIS got to his knee, taking a full eight count before rising, but he was in desperate trouble. Marciano went in for the kill, swinging wildly, before ending the former champion’s career with a crippling right hand that sent Louis through the ropes and perched precariously on the ring apron.

IT was a devastating knockout and Louis never fought again following the loss. He said after the fight, “I saw the right hand coming, but I couldn’t do anything about it”.

ROCKY defended the belt six times, beating Ezzard Charles twice and Archie Moore in his final fight. He retired at the age of 31 in 1956, to spend with his family although his physical condition certainly had something to do with his decision. He had fought with a ruptured disc in his back since 1949, as well as an arthritic right elbow, which slightly hindered the power with which he could throw his signature right hand, since the Louis fight.

BOTH men were inducted into the International Hall of Fame as part of the inaugural class in 1990 and are sadly no longer with us. Marciano was killed in a plane crash aged just 46 in 1969, whilst Louis died in 1981 of a heart attack. Both legendary heavyweights are assured their places in boxing, as well as sporting, history.