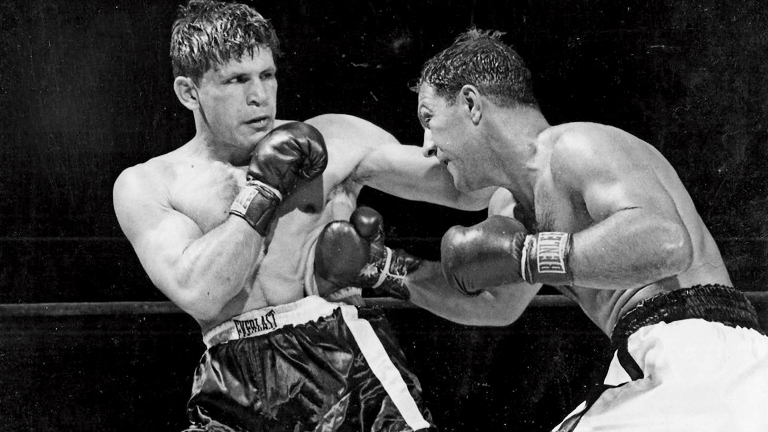 ROCKY MARCIANO proved what a great heavyweight champion he is when he successfully defended his title against Roland LaStarza at the Polo Grounds.

LaStarza, both eyes puffed and bruised, mouth bleeding, was knocked glassy-eyed to the canvas in the 11th round and although he was up when the count reached “five” and allowed to continue at “nine”, he was a sitting suck for the champion who waded in and dealt out terrific punishment before referee Ruby Goldstein rushed in to stop the slaughter.

LaStarza was afterwards taken to hospital for treatment.

It was Marciano’s second defence of the title he won last year and this was the first “all-white” heavyweight title fight for over 18 years.

The champion opened a cut on LaStarza’s right eye in the second round which bled profusely and the challenger sustained further cuts to his face in the eighth. But throughout the bout LaStarza faced his forlorn task with great spirit, though after the eighth round the challenger really went to pieces.

Marciano, still crude and many times looking like a novice with his wild right hand swigs, is however a tremendous puncher. He is so strong that he can afford to miss and waste his energy and like a bulldozer attaching a heap of rubble, sooner or later something has to give and so far, and probably for a long time to come, that something is going to be the man on the receiving end of Marciano’s gloves.

The champion was warned for “butting” in the second and lost the sixth round on a foul, but these were “straws in the wind” and at no time did these infringements look likely to influence the ultimate result.

LaStarza boxed well in the early stages, mostly on the retreat. He caught the champion with occasional long rights to the head and a left hook to the face was a points scorer in many rounds.

But Marciano kept going forward, relentlessly prodding, swinging and uppercutting his way inside, all the time weakening his man for the final pay off punch.

LaStarza complained to the referee again in the seventh, hinting that the champion was using his head in the clinches. When told to box on, LaStarza jabbed home two hands to the face and Marciano, slightly put out, chased the challenger around the ring, staggered him with a right to the jaw, but had insufficient speed to catch LaStarza with a follow-up punch.

The champion’s sledgehammer punches began to pound LaStarza with ever-increasing power from the eighth onwards. Roland gamely attempted to fight back, but Rocky brushed his efforts aside and tore in to weaken the challenger with rights to the head and face.

By the 10th, LaStarza was looking much the worse for wear. He was spitting blood and both eyes were cut and bruised. But back-pedalling he managed to avoid a lot of the champion’s punches and he appeared to be still sprightly on his feet.

[ Understanding the legacy of Rocky Marciano. ]

In the first minute of the 11th round, however, Marciano connected with the best punch of the fight. A right to the jaw took what remaining strength LaStarza had away from him. He sagged to the canvas, fell almost through the ropes but clambered back and got to his feet looking starry-eyed.

Marciano moved in for the “kill” at “nine”, ripping home punches that started from the region of his ankles LaStarza was helpless in the face of this pulverising onslaught and the referee did the only thing possible when he intervened to save the challenger from serious injury.

It was Marciano’s 45th consecutive victory, his 39th inside the distance.

After the fight comments:

Rocky Marciano: “He’s the gamest fellow I ever fought.”

Roland LaStarza: “He’s a great fighter, definitely a better fighter than when I fought him before – 5,000 per cent better.”

Rocky’s manager announced that is doubtful whether the champion will fight any more this year, which is just as well. There isn’t much opposition knocking about.