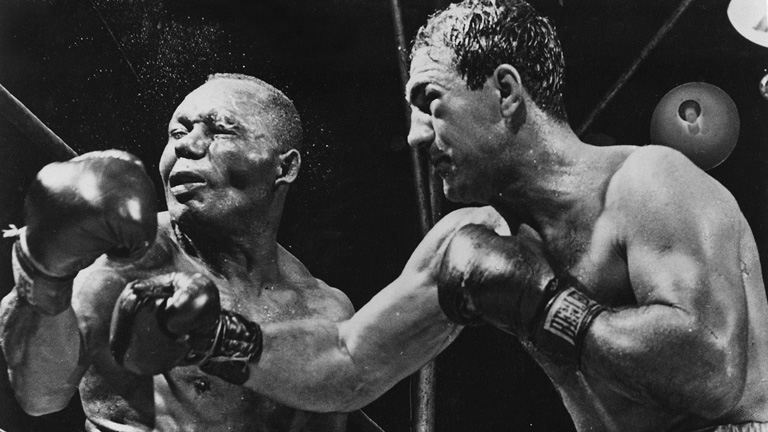 ROCKY MARCIANO w ko 13 JERSEY JOE WALCOTT
September 23, 1951; Municipal Stadium, Philadelphia, PA
OFFICIALLY 38 years old but rumoured to be as old as 42, Jersey Joe Walcott defied his advancing years for 12 rounds and 33 seconds of his battle with crude but unbeaten and powerful slugger, Rocky Marciano. Walcott – then the oldest heavyweight champ in history irrespective of the specifics – dropped Marciano in the first round and was up by scores of 8 (rounds) to 4, 7-5 and 7-4-1 going into the fateful 13th. With Walcott’s back to the ropes and teeing up his own right hook, Marciano bursts inside and lands his own before Jersey Joe’s has even formed. The force of the epic blow renders Walcott unconscious and the scorecards redundant on impact. Even so, referee Charley Daggart goes through with the formalities and counts to 10 over a fighter who is clearly not going to stir, let alone get up.

DID YOU KNOW? When asked for a prediction on the fight Jersey Joe Walcott’s trainer, Dan Florio, said: “Joe will knock him stiff in the first round.”

WATCH OUT FOR: The left hand that Marciano launches at Walcott as he’s sagging lifelessly down the ropes.