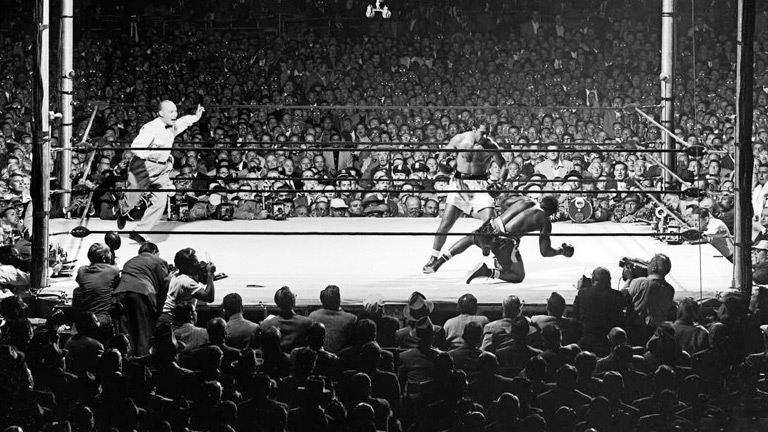 Nathan Fogg tells the story of an extraordinary heavyweight matchup, as two greats – Rocky Marciano and Archie Moore – met in the ring on this day in 1955

THE final, and one of the most noteworthy names, on Rocky Marciano’s perfect 49-0 record; light-heavyweight legend Archie Moore could do little to prevent the fate that had held those who came before him. In his last bow Marciano won in typically emphatic fashion, trading knockdowns en-route to his 43rd victory by way of stoppage. Despite already having amassed over 100 knockout wins himself coming into the fight, the 38-year-old Moore had only moments of success against the heavyweight champ.

The fight got off to an inauspiciously slow start, Moore using all the experience of his 20-year career by looking to keep Marciano at bay with his seven-inch reach advantage and aiming to tie him up on the inside whenever the distance was cut. Marciano is mostly remembered for his brutish strength, but showcased his somewhat underrated boxing skills through a masterful manipulation of the ring, bobbing and weaving underneath Moore’s jab and then stepping inside at will.

In round two Moore shocked the 61,574 spectators at New York’s Yankee stadium by landing a sharp counter right after evading a lunging hook which sent the champion down to the canvas. The 4-1 favourite was up by the count of two, having seemingly recovered strongly. Although Moore failed to capitalise on the flash knockdown, often missing with wild shots, he continued to have success in the round, drawing blood from champion’s nose.

READ The magic of Rocky Marciano

In the third and fourth Rocky began to work his way back into the fight despite a small cut opening under his left eye, landing clever combinations from body to head and generally outworking his challenger. In the latter round the tempo picked up as Marciano threw a series of hooks which trapped Moore against the ropes, who spent much of the three minutes covering up well in his cross-arm defence and avoiding any hurtful blows. Moore continued to outbox Rocky at times with his long jab creating problems, but Marciano eventually returned the favour in the sixth, scoring two knockdowns. The round started in typical fashion, with Archie circling around Marciano who continued to come forward in his bull-like style. As Moore backed up towards the ropes, Rocky stepped in with a huge left which just missed its target, but followed with an overhand right which landed flush. Despite beating the count, Moore looked in serious trouble as Marciano immediately pushed him back against the ropes.

What followed was one of the most incredible exchanges of punching ever produced in a boxing ring, Marciano landed huge, clubbing hooks and Moore not only managed to stay on his feet, but somehow found the strength to stand and trade. The next 45 seconds or so were a gruelling demonstration of non-stop action that is as impressive and exhausting just to watch today on a grainy YouTube video. Finding repeated success, Marciano landed a looping right that seemed to hit Moore on the top of his head, sending him down for a second time. Just beating the ten-count, Moore was on unsteady legs but survived the short remainder of the round.

The seventh was a much closer, Moore, somewhat recovered, landed an eye-catching one two which seemed to stop Rocky in his tracks, who had perhaps punched himself out slightly. By the eighth Marciano had re-asserted his dominance however, stepping up the punishment as Moore’s right eye began to close. Sensing the nearing conclusion of the fight, both were throwing heavy punches in order to get the other man out. After many missed shots, Rocky connected with a right hook which toppled Moore for the third time. With just several seconds left in the round, the challenger was saved by the bell whilst still on the floor and was allowed to carry on into the ninth. From the bell Marciano came out with intent, unleashing lefts and rights that stopped a stationary Moore gaining any momentum back into the fight. In typical fashion for the exhilarating fight, Moore simply looked to stand and trade with the aggressor; at times landing big counters, but for the most part taking a heavy onslaught. After another incredible exchange, Marciano landed two quick left hooks that ended the fight, sending Moore down for the last time, slumped in his own corner and unable to beat the count.

The win would be Rocky Marciano’s last act in a boxing ring, cementing his legacy as an all-time great brutally dispatching a boxing legend. Moore, perhaps past his prime, would go on to fight for several more years as light-heavyweight king . His stock at heavyweight around had already fallen however, and Moore would come up short against the likes of Muhammad Ali and Floyd Patterson. In the unique history of heavyweight prizefighters, this fight will always be remembered. A truly great display of all that makes the division so exciting, the immense strength showcased as the two battled toe-to-toe goes unparalleled in today’s era.