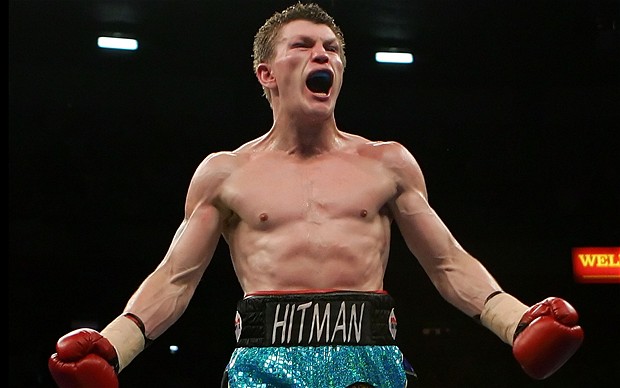 RICKY HATTON began the Las Vegas journey that captured the imagination of British boxing fans On This Day back in 2007, when he picked up his 42nd straight victory and the IBF light-welterweight belt, beating Juan Urango by a wide unanimous decision at the Paris Hotel.

It was Hatton’s debut in Vegas and the victory set the wheels in motion for a huge fight with Floyd Mayweather later in the year. “The Hitman” was fighting for the first time in seven months, since he captured the WBA welterweight title from Luis Collazo in Boston.

Hatton was making the step back down to light-welter and came up against Urango, the tough Colombian, who had made rapid progress through the pro ranks, to pick up the title Hatton had himself vacated in just his 18th fight.

Urango won the belt six months previously against Naoufel Ben Rabeh in Florida, but he wasn’t ready for the storm that Hatton brought to Las Vegas, including 3,000 screaming Brits who had made the trip over to the boxing capital.

The fight itself did fail to live up to expectations, with Hatton starting brightly, but tired badly as the fight went on. Urango tried to use his vaunted strength and bully Hatton, but in the end he rarely troubled the Manchester man.

Urango seemed overawed by the occasion early and was static in his movement, which left him easy to exploit. He did catch Hatton in the third and rattled him with some body shots in the fifth.

After 12 rounds, all three judges saw it exactly the same way, scoring it 119-109, and giving Hatton back the IBF belt, as well as the IBO belt that was also on offer.

Hatton went on to take on Jose Luis Castillo, who fought on the same bill that night at the Paris, at the Thomas & Mack Center in June, as the interest in a clash with Mayweather began to grow. Castillo, a former two time lightweight champion was no match for Hatton, who stopped him in the fourth to secure the huge clash with Mayweather.

Hatton went on to lose to Mayweather, before retiring in 2009, after a disastrous loss to Manny Pacquiao. He returned in 2012 in Manchester, but lost in his comeback to Vyacheslav Senchenko and decided to hang up his gloves for good.

THE HIGHS AND LOWS OF RICKY HATTON

Urango won the IBF belt back in 2009 in Montreal, beating Herman Ngoudjo on points. Ngoudjo, was also on the card the same night Hatton beat Urango, in a losing effort to Castillo. After re-claiming the title, Urango lost his next fight to WBC titlist Andre Berto, although his belt wasn’t on the line.

The Colombian did defend it next time out, knocking out Randall Bailey, before getting stopped himself for the first time in his career against Devon Alexander. Urango didn’t fight for two years after the loss, but returned in 2012 with two simple wins. He hasn’t fought since.