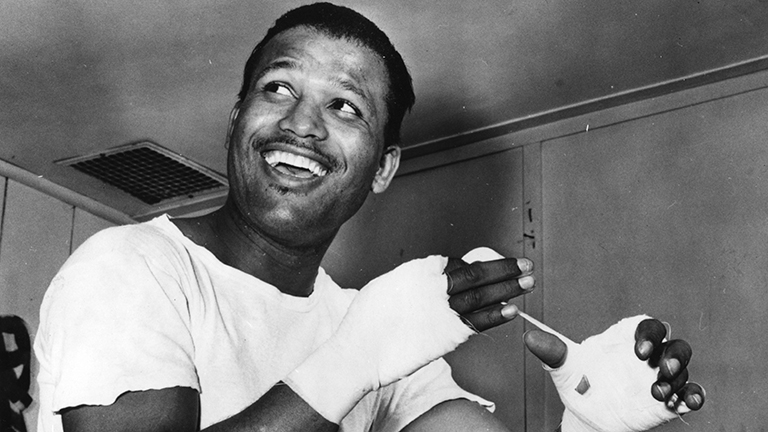 A GREAT hand for Randolph Turpin for a magnificent victory gained over Sugar Ray Robinson – a triumph of physical strength and boxing science over a world champion, generally regarded as a brilliant and expert exponent of the noble art. Our man went into the exhibition hall ring the underdog at odds of not less than 5-to-1 one against. Many critics feared the consequences of what they regarded as a prematurely made match; in fact, about the only man who wasn’t worried was Randy himself.

But Turpin was blessed with supreme confidence in his ability to win, despite the great publicity afforded his opponent and the sensational stories of his apparent invulnerability. Perhaps Randy remembered the encouraging remarks made to him by Len Harvey at this year’s “Boxing News” annual luncheon. Commenting on the fourth coming world’s title fight, the many times British champion remarked, “I see no reason why you cannot beat Superman, he’s two arms, two legs, two fists, so have you. Just get in there and show him who’s boss and you’ll win the world title.”

Well, that’s exactly what Turpin did. From the very first going he carried the fight to Robinson and he never let him up for a single moment thereafter. He had seen to it that he was superbly fit; he had well planned his campaign. It did not take long to realise that Robinson could be hit and hurt; that he could take the champion’s best punches unflinchingly; that he could out-guess and outbox him. After the first round, when Randy walked quietly back to his corner and sparingly relaxed on his stool he smiled up at his seconds as much as to say, “I’m the governor in this scrap.” And so it proved. It has been said that Robinson was not at his best form. Well he had only himself to blame. If he neglected his training and underestimated the strength of his opposition then he deserved to lose his title.

With all his experience he should know by now that an opponent is always dangerous while he is on his feet and if considered that Turpin was going to be “easy meat” then he must have had the shock of his life. The champion scaled 11st 0lbs while his challenger tipped the beam at 11st 4lbs. It was Turpin’s consistent use of the good old-fashioned straight left that beat Robinson. In spite of his dancing feet and weaving tactics, Sugar rarely got his face out of the way of these leads, that were sent with power and precision. Turpin did not wildly toss his right, but kept this weapon under restraint, using it effectively in the clinches as a short hook to the head. He also hooked Robinson with the left from long range and caught Ray with some solid blows that sent the American reeling round the ring and back-pedalling in brisk fashion. It was obvious that British champion was the stronger of the pair. He tossed Ray around in the clinches as if he was a baby and the American only managed to stay close by hanging on like a limpet. Sometimes Randy had to wrench himself free to respond to the call of the “break” then he would immediately go after the world’s champ again. Robinson flicked out a left hand to the face but was very short with most of his leads, while those that got home carried little sting.

His best blow was a right uppercut to the body that was whipped in at lightning speed. These were the punches that dropped the best in America and on the continent, but Turpin took them in his stride. He also rattled the ribs with a two-fisted bombardment whenever he got the opportunity. But the occasions were rare and Turpin remained unaffected. When Robinson lashed out with a swing, his blows bounce as few rights on Randy’s chin, but only a twice was the Britisher shaken in the numerous clinches there was little real infighting. Both were keen on typing-up tactics and honours were about even although Turpin’s extra strength enabled him to push Robinson about in what must have been humiliating fashion for the great Sugar. On a few occasions that they dropped the fencing and took a belt at one another, it was Robinson who was first to break off. He usually started these punching spells and got home some sharp shots, but when Turpin joined issue, his heavier punching soon made the American anxious to get away to long range.

As round succeeded round, Randy’s chances grew rosier. The crowd of 18,000, which had raised the roof when he entered the ring, began to realise after the halfway stage that the Robinson was burst, that only a knockout would prevent Turpin from winning the title and this possibility seemed less likely the further the contest went. With increasing cheers Turpin added to his advantage while Robinson went weary and lost ground rapidly. He was always in there fighting but he had no way of stopping the Britisher and no answers to his moves and leads.