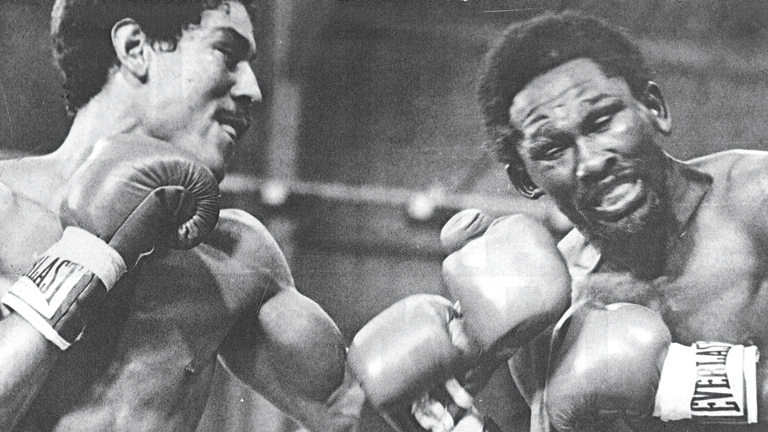 A celebration of Wilfredo Gomez – a very special talent

PUERTO RICO has produced many outstanding fighters, but arguably the best is Wilfredo Gomez – and that’s ahead of Wilfred Benitez, Felix Trinidad and Miguel Cotto.

Gomez held the WBC super-bantamweight title from May 1977 to early 1983, making a record 17 defences for the division. He didn’t lose the title in the ring, but relinquished to move to featherweight, where he became WBC champ. And he would eventually hold the WBA belt title in a third weight class, super-feather, when clearly past his best.

If he didn’t become a global superstar, it was probably because the 8st 10lbs class was still only a year old when he first became world champion, and many took it lightly as an “in between” weight. And when Wilfredo first stepped up to 9st, against Mexican Salvador Sanchez in 1981, he was dropped and stopped in eight rounds. But at his best he was a formidable fighter. His nickname of “Bazooka” suggests one-punch knockout power, but in fact Gomez overwhelmed opponents with blazing combinations of hurtful, accurate blows.

In 1978 former Boxing News editor Graham Houston described Gomez as, “a boxer-puncher with the feline quality of a smaller Jose Napoles. He’s very dangerous because he always seems poised to strike. He’s got the sloped shoulders of a puncher and his power’s combined with a very high degree of accuracy.”

Gomez was a precocious talent. He competed in the 1972 Olympics as a 15-year-old flyweight and lost first time out. Two years later, when still only 17, he struck bantam gold at the inaugural World Amateur Championships in Havana, destroying a Cuban in the final. His pro debut saw him held to a draw, but then Wilfredo won his next 32 bouts inside the distance. He so dominated the super-bantams that he had to seek other challenges, most notably in October 1978 when he defended against WBC bantam king Carlos Zarate. It was a superfight: the Mexican had won all his 52 fights, 51 inside the limit, while Gomez had 21 wins (all early) to go with that initial draw.

Yet Gomez made it one-sided, flooring a flu-weakened Zarate three times and stopping him in five rounds.

The Sanchez setback kept him down in the 8-10 division and in 1982 he figured in a breathtaking battle against Mexico’s Lupe Pintor at the New Orleans Superdome. Both slammed away non-stop until Pintor, a former unbeaten WBC bantam champion, wilted to be rescued in round 14.

That was on the Thomas Hearns-Wilfred Benitez bill, and six months earlier Gomez had retained in the chief support to the Larry Holmes-Gerry Cooney world heavyweight title fight in Las Vegas.

In the end, Gomez’s talent proved a burden as well as a blessing. It was said that he didn’t bother training specifically for an opponent, rather just worked out to shed weight. And in retirement he suffered drug problems, putting on so much weight that he was hardly recognisable. But nobody can mistake how good Wilfredo was in his prime.

Celluloid hero
In 2003 a biographical film entitled Bazooka: The Battles of Wilfredo Gomez was produced by Cinemar Films. The documentary was directed by Mario Diaz and filmed in New York City.