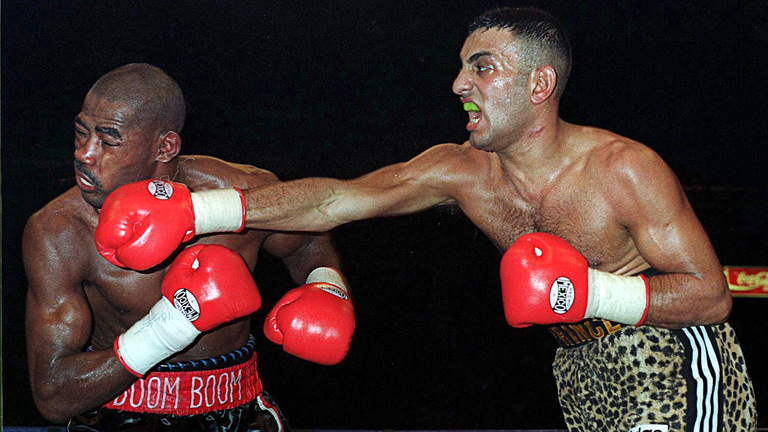 1. UNBEATEN in 24 professional outings, ‘Prince’ Naseem Hamed had defended his WBO world featherweight title four times prior to meeting IBF champion Tom Johnson in 1997, and was aiming to prove himself as the best in the division.

2. Although considered the hardest puncher at 126lbs at the time, a recent struggle with Manuel Medina – who had won and lost against Johnson – highlighted some of the Sheffield star’s limitations, though he was favourite to beat the American at the London Arena in Millwall.

3. Johnson, who was no stranger to travelling to opponents’ back yards, was unbeaten in five years entering the contest and was looking to make a 12th successful defence of his title. Only Eusebio Pedroza (21) and Barry McGuigan (19) had bettered that achievement before.

4. Naz smirked at Johnson as the opening round began, and while the visitor tried to use it as an exploratory stanza with his jab, Hamed caught him off balance with a short left, sending him to the ropes. He dropped his hands in a show of confidence, though still kept a safe distance.

5. The second was also relatively quiet, though Hamed landed well with a decent one-two in the final 30 seconds and another grin spread across his lips. He bore a more serious expression in the third – the round his mother had predicted he would win in – but Johnson was in control for a spell, until Naz had him in trouble with a left. Johnson managed to hold, but Hamed soon landed again. However the IBF champion turned Hamed’s head full circle with a right hand on the bell and Naz’s legs buckled alarmingly.

6. A huge left had Johnson teetering on rubbery legs at the beginning of the fourth but he refused to go down and landed some solid jabs after his head had cleared.

7. They traded heavy blows in the fifth and Johnson used smart boxing to take the sixth and a brace of counter right hands had Hamed in a bit of danger as the round came to a close.

8. Naz, now wary of Johnson’s counters, wobbled Tom with a pair of thudding left hands but somehow he remained upright. After a few close rounds, Hamed was smiling again.

9. Naz opened a cut under Johnson’s right eye in the eighth and a short left had him staggering backwards with a minute to go. He crashed home a right then a left but the stubborn IBF champ was still on his feet. A few more rights forced Johnson into a neutral corner and as he lurched forward, Hamed leaned back and exploded a monstrous left uppercut, stripping Johnson of his senses. Referee Rudy Battle waved it off at 2-27.

10. The emphatic win convinced some doubters across the pond of Hamed’s class and Jay Larkin, Showtime’s TV chief, immediately expressed his desire to get Naz on the undercard of the upcoming clash between Evander Holyfield and Mike Tyson in Las Vegas.