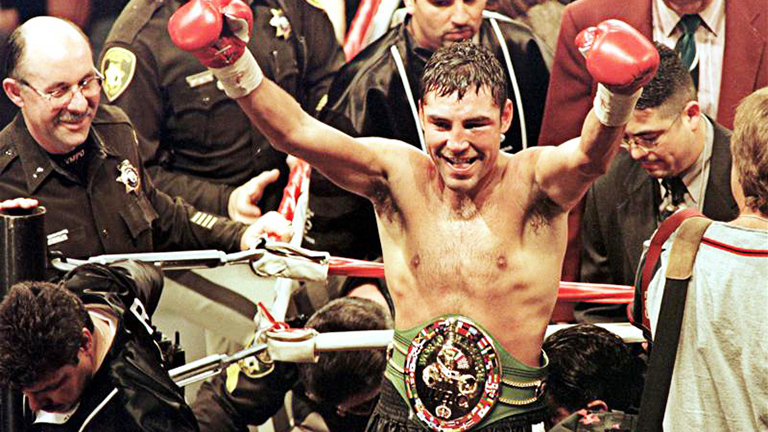 IKE QUARTEY was returning from a 14-month absence from the ring – during which time proposed fights against Felix Trinidad and ‘Sweet Pea’ Pernell Whitaker had collapsed – to challenge Oscar De La Hoya for the WBC welterweight title at the Thomas and Mack Center in Las Vegas, on February 13 1999.

THIS was viewed by many as the Golden Boy’s toughest test since he turned professional seven years earlier. They felt that De La Hoya’s perfect 29-0 record was filled with fighters who were either over the hill like Julio Cesar Chavez and Whitaker, too small like Rafael Ruelas and Genaro Hernandez, or simply too over-matched like Patrick Charpentier. Claude Abrams said in his preview for Boxing News: “We knew Leonard was good, but when he defeated Roberto Duran and then Hearns, we recognised his brilliance. Now it’s De La Hoya’s turn.”

QUARTEY, himself undefeated with a 34-0-1 record, had a legitimate claim to be the world’s best welterweight. A week later at Madison Square Garden, two other fighters with designs on the top spot were scheduled to meet for the IBF strap – Trinidad defending against Whitaker.

THE winners of these two bouts looked certain to meet each other later in the year for the right to claim welterweight supremacy in one of the richest fights in boxing history.

IKE appeared to take control of the first half of the fight with his speed and power. At the end of the third round, Quartey buckled De La Hoya with a pair of crunching left hooks.

In the sixth, De La Hoya went one better and floored his man with a left hook of his own – only for Quartey to repay the favour moments later. Bazooka then claimed the next two rounds, landing a particularly hard right hand in the ninth, before tiring and allowing Oscar back into the contest in the 10th and 11th.

THE GOLDEN BOY needed a big round, and in a breathtaking 12th Oscar came out from the corner like a man possessed, flooring Quartey with a vicious left hook within seconds of the restart. De La Hoya punched himself out in search of the knockout but the durable Ghanaian threw enough punches to hear the final bell.

THE judges’ scores of 116-112 and 116-113 for De La Hoya compared with the 114-115 for Quartey gave the Golden Boy a close, controversial victory. After the fight, he said: “I made it a tactical fight. I wasn’t supposed to be like that. It was still one fight closer to making history. I want to prove I’m the best.”

QUARTEY could not understand how he was not awarded the victory. He said: “Oscar didn’t do anything for eight rounds. You saw the fight. He didn’t do anything. I matched him for speed and power. He came to survive. I’m too tough.”

INDEED, Oscar De La Hoya went on to face Trinidad later that same year at the Mandalay Bay Resort & Casino. It would be De La Hoya who, after dominating the first half of the fight, dropped a controversial decision to Trinidad. Believing he had the fight won, Oscar got on his bike for the last few rounds, allowing Tito to take them and leave the last impression on the judges. If only he had come out for the 12th round like he did against Quartey.