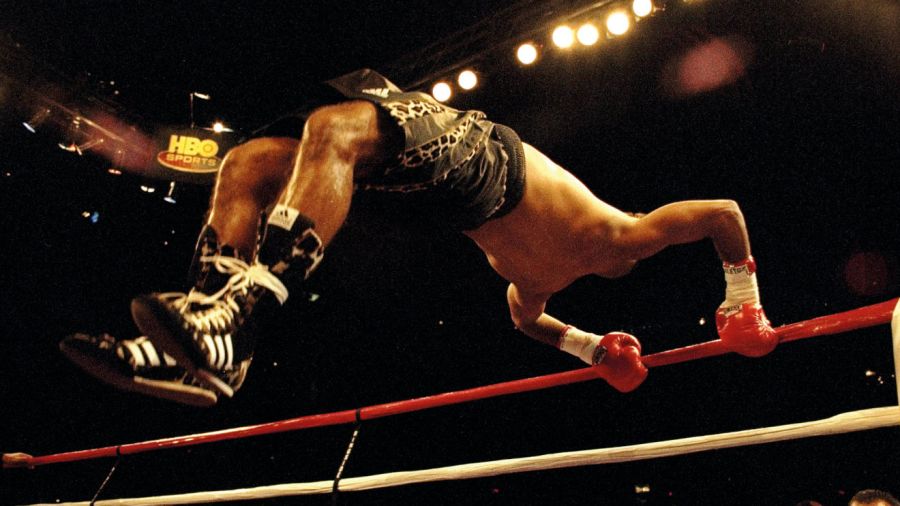 TURNING professional at 18 years of age and later and amassing a 36-1 (31) record, Naseem Hamed captured the WBC, IBF and WBO featherweight titles during his 10-year journey through the professional ranks.

Naz spent seven of those years setting the boxing world ablaze with his brash ring walks, cocky demeanour and explosive power. He defended his three world titles a combined 17 times and had a Hall of Fame-worthy 16-1 record against current or former champions with 14 of those victories coming inside the distance.

Here, we go 12 rounds with the ‘Prince’ – and there aren’t too many who can claim to have done that.

1. DEBUT – Ricky Beard was the man in the opposite corner for Naz’s first professional fight on April 14 1992 at Mansfield Leisure Centre. The fight ended with a knockout win for Hamed, who had to fill his shorts with lead just to ensure he was heavy enough to actually fight!

3. BOOM BOOM – Five fights later, Naz came up against American Tom ‘Boom Boom’ Johnson. Johnson had defended his IBF featherweight strap 11 times coming into this bout at the New London Arena but, like Robinson before him, was cut down by Hamed in the eighth round.

4. KNOCKOUT – In his eighth defence of the WBO featherweight title, Hamed came up against Jose Badillo, the tough Puerto Rican who had only lost one of his 20 professional contests – Hamed became the first to register a knockout in the seventh round at the Sheffield Arena on October 11 1997.

5. MADISON SQUARE GARDEN – Was the venue on December 19 of the same year for arguably Naseem’s greatest night, when the ‘Prince’ rose from the canvas three times to halt Kevin Kelley in the fourth round. This was Hamed’s ninth defence of the WBO featherweight title and his first appearance on American soil.

6. VAZQUEZ – Hamed’s next fight came against Wilfredo Vazquez who was on an eight-fight winning streak which included four defences of the WBA title – which Naz would have won with this 7th round stoppage at the Nynex Arena had Vazquez not been stripped for taking the fight.

7. SPLIT – Naz’s unanimous decision over the granite-chinned Wayne McCullough in October 1998 would prove to be his last with trainer Brendan Ingle and promoter Frank Warren.

8. ANOTHER INGLE – Paul Ingle was in the opposite corner on April 10 1999 at the M.E.N Arena. Down twice before the 10th, it looked as though Ingle could force a stoppage and become the first man to beat Naz. However, Hamed turned the tide back in his favour in the very next round and put an end to Ingle’s challenge with a powerful left hand.

9. JOE LOUIS ARENA – Detroit was the setting in October 1999 when Hamed unified his WBO strap with Cesar Soto’s WBC version in a unanimous decision win.

10. MAGIC CARPET – It had been eight years since South African Vuyani Bungu had tasted defeat and no man had ever stopped him. Entering the ring on a ‘magic carpet’, the ‘Prince’ soon changed that stat by halting his man in the 4th at the Kensington Olympia on March 11 2000.

11. PLAYING WITH FIRE – Was how Naz’s April 2001 challenge against Marco Antonio Barrera at the MGM Grand was billed. Although he was the favourite heading into the contest, Hamed dropped a unanimous decision after twelve rounds, the scorecards reading 116-111 and 115-112 twice.

12. FAREWELL – Naseem Hamed only fought once more after the Barrera fight, despite initial talk of a rematch with the Mexican. In his last professional fight, on May 18 2002, Hamed looked under-par in easily outpointing Manuel Calvo at London’s ExCel Arena, winning almost every round. Much talk of a return surrounded the ‘Prince’, but this was his last fight at the age of 28.

LISTEN TO HAMED REFLECT ON HIS CAREER IN ONE-HOUR INTERVIEW