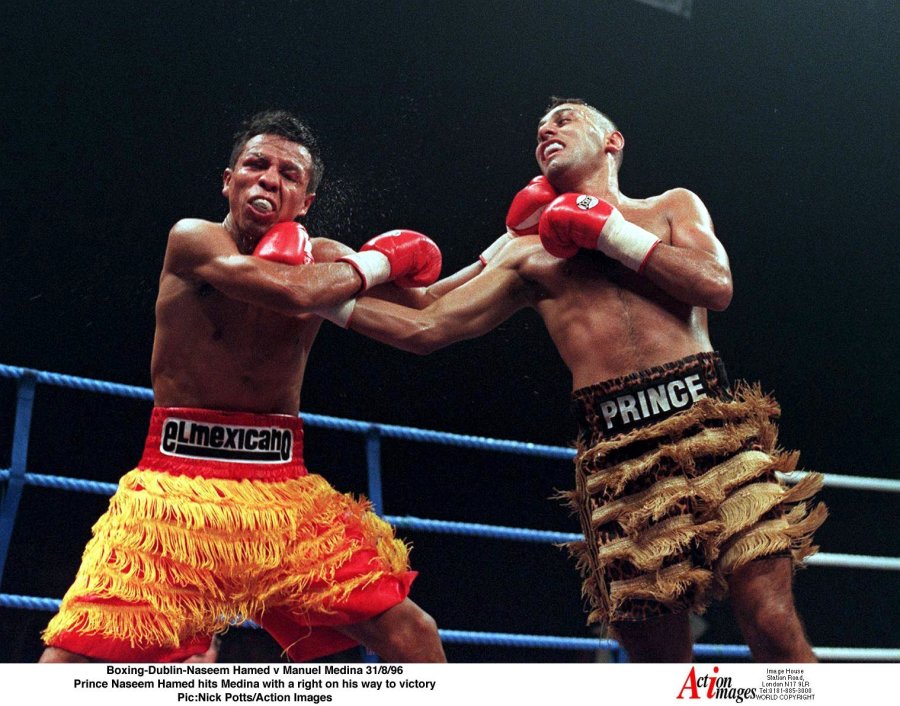 The story of Naseem Hamed transforming from a boy to a man during his August 31, 1996 showdown with Manuel Medina, writes Andrew Lawrence

1. HAMED was at this time the new boxing superstar, in Britain especially. His ring entrances were theatrical performances that ended with his signature front flip into the ring. Even inside the squared circle the performance wasn’t over, with dancing, playground antics and a peculiar taste in outfits. Everything he did was attracting a lot of attention and an endlessly growing fan base. Not that his 22-0 record wasn’t enough.

2. Although Manuel Medina wasn’t considered to be much of a threat to Hamed, as a veteran he had a history of stunting the growth of new prospects. As we recalled in our issue before the fight, Medina was “a world-class performer who, only 11 months ago, claimed his second world title by defeating the promising Alejandro Gonzalez.”

3. Mexican underdog Medina was going into the fight with a reputation as a “powder puff” puncher, who had let the vast majority of his fights go to a decision. Hamed, being a different breed of animal, ended his last 10 fights in short and spectacular fashion and was extremely confident that this bout would end the same. “Prince” Naseem said, “When these two rocket launchers hit him right on the end of his chin, it will be goodnight Vienna. I’m the hardest puncher in the division and when my opponents realise that, they end up dropping.”

4. There seemed to be even more interest in Hamed’s rivalry with Wayne McCullough, the Irish bantamweight, than the fight ahead. During the weigh-ins, McCullough claimed that Hamed had passed remarks on his wife which resulted in an aggressive exchange between the two. If true, this was a very risky move from Hamed, considering McCullough was one of the biggest stars in Dublin, the city he was set to fight in the next day. The stunt ended with Hamed being booed into the ring and McCullough taking every chance to circle the perimeter and steal the limelight.

5. At the beginning of the fight, it was not looking the way Hamed had been expecting, as all of his attempts at finesse and showmanship were being stumped with short and blunt counters from the challenger. This carried on until the end of the second, when Hamed dropped Medina with a right hand. It took him six seconds of the count to get back up and the rest of the round to regain his senses.

6. During the third, Medina landed a clean straight and left hook which managed to daze Hamed, who may have been distracted by the crowd chanting “McCullough” and cheering for every punch landing on the Sheffield man. In the fourth and fifth, there was a lot of the same, only this time the grinning and taunting had faded as stinging hooks began to wear Hamed down.

7. Both fighters shared exchanges for the next few rounds until Hamed landed a huge uppercut which badly cut Medina. This seemed to re-energise the champion, as the grin returned to his face. For the remainder of the fight both warriors traded punches evenly, but with every strike from Hamed dealing more damage than two of Medina’s, the result seemed to be inevitable. The challenger was dropped two more times before referee Gino Rodriguez stepped in to end the fight in the 11th round.

8. Many considered this a defining moment in the career of Hamed, in our issue we called it the moment that “a boy became a man.” This was Hamed’s first chance to display that he could overcome adversity.

9. Hamed, being one to hold a grudge, didn’t forget the confrontation with McCullough, who was, at the time, undefeated and a little further up the food chain. Two years down the line when McCullough saw Hamed as a more worthy opponent, “Prince” got his opportunity to claim his revenge, which he took after securing a 12-round verdict.

10. Hamed would go on to divide opinion in the boxing world, with observers seemingly split on whether or not he deserves a place in the International Boxing Hall of Fame. Medina’s career continued in much the same way as before, being a skilled and successful, yet somewhat lacklustre boxer.