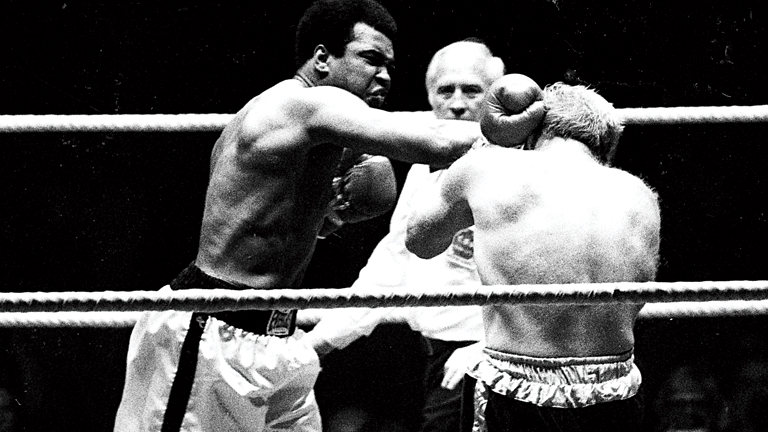 WITH the world tired of the Muhammad Ali-Sonny Liston saga, it was time for the new champion to move on. On November 22, 1965 he accepted the challenge of former champion Floyd Patterson, whom Sonny had dethroned via two equally savage first round knockouts. The despair of those defeats had forced Patterson into hiding. He would don fake beards and moustaches when he went out to the shop. Floyd was the youngest man to ever win the title – aged just 21 back in 1956 – and had been the first in history to regain it. But the losses to Liston had hurt him bad, and he knew defeating Ali would restore some pride.

Patterson had first met Ali – then Cassius Clay – in 1960 when the young man was en-route to winning Olympic Gold. Clay screamed at the then-champion that he was coming for him. Five years later, that collision was set.

Patterson had won five in a row since the Liston drubbings, proving he belonged among the elite with victories over Eddie Machen and George Chuvalo. And he’d been studying Ali’s progress, both inside the ring and out. He was not impressed.

“The image of a Black Muslim as the world heavyweight champion disgraces the sport and the nation,” Patterson before the fight. He refused to call his opponent by his name, instead referring to him as ‘Clay’. Ali was furious.

“Patterson says he’s gonna bring the title back to America. If you don’t believe the title is already in America, just see who I pay taxes to,” he said. “This will be a mismatch. Floyd Patterson will be no match. He’s too short, he’s too slow, he don’t have the reach, he can’t take a punch, he don’t hit hard and he don’t have the footwork. This will be a mismatch. I’ll hit him about six times to every miss that he throws.”

Patterson came into the bout with a back injury that he kept secret. Fearful of damaging his reputation further, Floyd was determined to fight. But his problems soon became clear as Ali toyed with him. The challenger’s corner desperately massaged his back between rounds, and tried to persuade him to quit. But Patterson stubbornly, and unsteadily, fought on, rising from a sixth round knockdown before the referee halted the slaughter in the 12th.

Ali was widely criticised for suspending the beating.

“He could have knocked Patterson out whenever he wanted, but let’s face it, Clay is selfish and cruel,” said the legendary Joe Louis. “Yes [I carried him for six rounds],” Ali admitted. “I am showing you good boxing. You’d be the first to condemn me for killing him cruelly. He has got beautiful children and I wouldn’t want to hurt him just for the pleasure of the audience. I beat him with my creative and scientific ability and not by punching him too hard.”