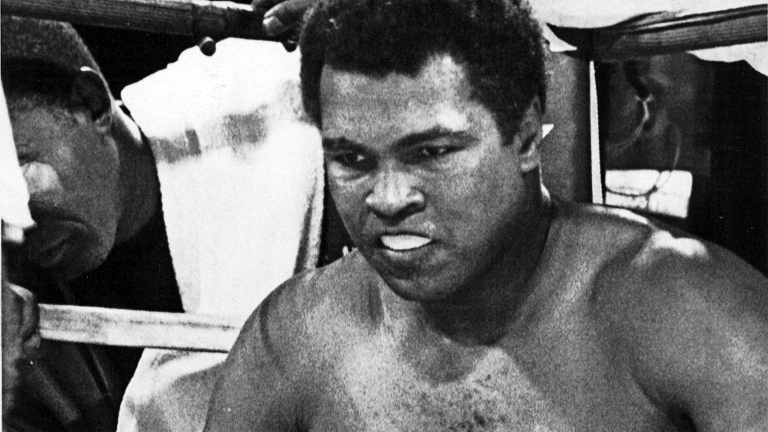 MUHAMMAD ALI refused to believe it was over.

Even after Larry Holmes, his heavyweight successor and former sparring partner, had hammered him into 10th round retirement in October 1980.

As his bruises healed and his body stopped aching, Ali started to dream again. He blamed his dreadful showing on overdosing on thyroid medication, that by taking “two pills instead of one” he had ripped his body of energy. Just 18 months before, after beating Leon Spinks in his final triumph, he spoke of his desire not to fight too long. But denial had banished reason from his mind.

“A month before the Holmes fight I started to think something was wrong,” he said. “Two weeks before the fight I started getting more tired. But I thought it was because I was reaching the peak of my conditioning. If it’s age, I’m finished and I’m washed up I’ll face it. But if was because I wasn’t healthy because of the drugs… Healthy, I can beat Holmes. I shall return.”

There would be one more outing for this ghost of the past. On December 11, 1981, in Nassau, Bahamas, Ali laced up the gloves for the final time against 28-year-old Trevor Berbick. “The Greatest” was a month shy of his 40th birthday.

Two physicians, including Ali’s former doctor Ferdie Pacheco, stated that Muhammad was already punch drunk. If ever an ending was unfitting to what came before – even in the cruel land of boxing – it was this one.

The day of the fight was chaos. Seats were still being assembled in the arena, gloves had to be flown in from Miami, and Berbick threatened to pull out over fears he was not going to get paid. But the show went on.

Compared to his insipid showing against Holmes, Ali performed decently. But measured against any other outing of his illustrious career, it was a dreadful display. He won a few rounds but was out-hustled and outworked over the 10-round distance. Two scores of 99-94 and one of 97-94 provided a realistic picture of what had taken place.

“It was close, but I have to go along with the judges,” Ali evaluated. “If Berbick had been 39 like me he wouldn’t have beaten me. I found I couldn’t tie him up and move the way I wanted to. It was a good fight but he was too young and too tough for me. He beat me on aggression.”

Ali delved deeper into the truth of the situation.

“Father Time has caught up with me. I’m finished. I’ve got to face the facts. We all lose sometimes. We all grow old. This is the end.”

The tongue that had seduced the world’s attention was now tired and clumsy.

His health began to deteriorate in the years that followed. Concerns that he had put his body through too much began to be realised. His public appearances diminished and in 1984 he was diagnosed with Parkinson’s Disease.

It was not easy for the man with the gift of the gab, and golden skills, to adjust to his rapid decline. He was exploited by con men, his marriage came to an end, and his handsome features softened.

But Ali refused to be held prisoner by yesterday. In 1986 he married his fourth wife, and friend since 1962, Lonnie. Ali’s state of mind improved, and it soon became clear that, despite his physical deterioration, the mischief and lust for life remained.

His business affairs were tightened, including the franchising of his name, and slowly but surely the world started to fall in love with him all over again. At peace with his condition, Ali eased back into the spotlight in the 1990s.

Films and documentaries – notably the Oscar winning ‘When We Were Kings’ about his fight with George Foreman – introduced him to a new generation. After his shaking body lit the flame at the Atlanta Olympic Games he achieved legendary status normally reserved for the deceased. Muhammad Ali was right up there with the likes of Elvis Presley, Martin Luther King, and John F Kennedy as a leader of his century.

At a fundraiser after the New York terror attacks of 2001, Ali made a speech that harked back to his stance against the Vietnam War. A stance that played a huge part in ending that horrific conflict. Still devoted to religion, he poignantly spoke of his peaceful faith that was opposed to “killing and murder and terrorism.”

Ali reshaped the sport that made him the greatest and, when his body rebelled against the rigours of war, he refused to accept defeat. His absurd courage strengthened by adversity. Never before has a man transcended their trade like Ali and boxing. In retirement, and ill health, he became bigger than the fight game; painting extra layers to his masterpiece without inhibition. And to have had a leader of such outrageous showmanship and beauty, boxing will forever be grateful.

GET THIS WEEK’S BOXING NEWS, established in 1909 and the longest running publication on the market SAVE MONEY and GET THE BEST COVERAGE EVERY WEEK.