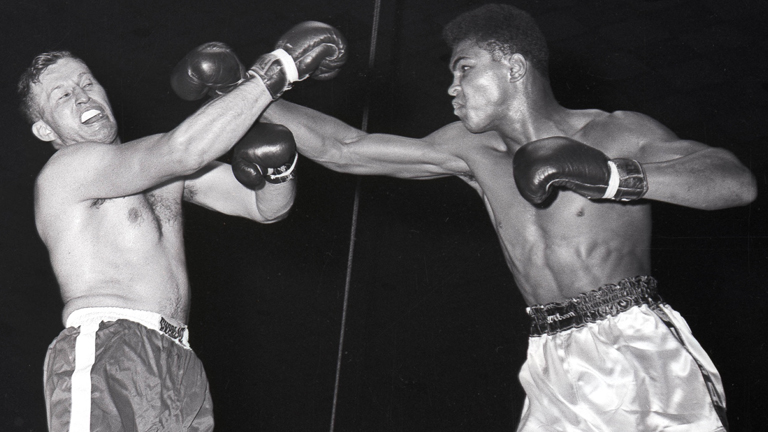 ON this day 59 years ago Muhammad Ali, to some the greatest heavyweight champion in history, had his very first professional fight. Back on October 29, 1960, inside the Freedom Hall State Fairground in his hometown of Louisville, Kentucky, Ali, then known as Cassius Clay, met and defeated boxer/policeman Tunney Hunsaker over six largely one-sided rounds.

No-one, not even the 18-year-old Clay himself, could have possibly had any idea of all that lay ahead for the flashy, cocksure boxer.

Weighing in for the fight with the 15-9-1 30-year-old at just 186-pounds (Hunsaker wasn’t much heavier at 192), Clay would have been embarking on a cruiserweight career had the bout taken place today – and he’d have been a small cruiser at that. How times have changed, what with today’s huge juggernaut heavies; men who weigh around 250-pounds or more.

Back then, though, Clay was big enough to compete at heavyweight. Not that many people believed he was either big enough, strong enough or just plain good enough to do what he boasted he would do and become the world heavyweight champion. Clay had captured Olympic gold earlier that same year, at light-heavyweight. Nobody felt the teenager would one day go on to not only win the world title that was currently in the possession of Floyd Patterson, but to hold it for a number of years and even regain it on two occasions.

All that was still a long while away, however, and for now the man who would soon go on to be known as “The Louisville Lip” on account of his brashness and his big mouth, had to deal with Hunsaker, a man with a fair amount of pro experience. Hailing from Caldwell County in Kentucky, Hunsaker entered his fight with the Rome Olympian having lost his previous six fights, two by stoppage. The part time fighter was durable enough though, and he was a good test for Clay in his first paid fight.

After losing the unanimous decision to the man who would go on to “shock the world,” not against Patterson, but against Floyd’s successor, the terrifying Sonny Liston, Hunsaker had just seven more fights, winning just two. Tunney called it a day in the spring of 1962.

By this time, Clay was 13-0 and he had proven he could get up from a knockdown if he had to. Sonny Banks decked him with a left hook in their Feb. 1962 fight, only for Clay – who had by now begun making uncannily-accurate predictions ahead of his fights – to get up from his 1st-round trip to the canvas and halt him in the 4th-round. By now working his way up the world rankings, Clay was about to see the fearsome Liston rip the world crown from Patterson. Now “The Lip” had a new target to go after.

As history shows, Clay went on to “whup” Liston – refereed to by Clay as “The Big Ugly Bear” – and he did so twice, both times inside the distance. A mesmerising reign had begun with the Feb. 1964 win over Liston, and many more times through the years, Muhammad Ali, as he was now known, would thrill the entire world.

From his local arena in Louisville, Ali went on to fight in places that would have blown his young mind in 1960: the African jungle of Zaire, the legendary Madison Square Garden in New York, Arsenal football stadium in London, England, the Waldstadion in Frankfurt, Germany, The Bung Karno Stadium in Jakarta, Indonesia, the Araneta Coliseum in Quezon City, Manila, The Philippines and many venues in Fabulous Las Vegas.

Very much a world champion, Ali saw it all through his amazing boxing career. A career that began exactly fifty-eight years ago today.

Tunney Hunsaker passed away in April of 2005, aged 75. He will forever be remembered by boxing fans as “The Greatest’s” first professional opponent.