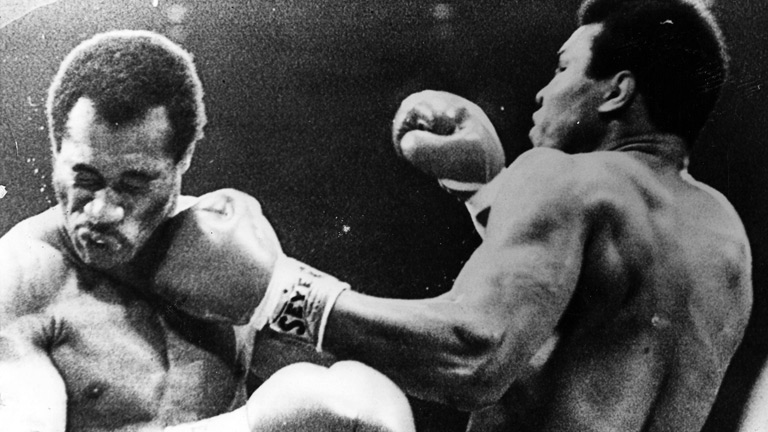 ENJOY our original report from an important fight in Muhammad Ali’s career. One in which he was forced to call on all his pride and all his courage, if need be, to prove to the world he was not a has-been. Ali had his jaw broken by Norton six months earlier and both were in for another punishing evening.

MUHAMMAD ALI, trimmed to a svelte 15st 2lbs, called on pride and courage to snatch a bitterly-fought split decision over muscled ex-Marine Ken Norton (14st 9lbs) in a thrilling return 12 round battle at the fabulous Forum.

So Ali gained revenge for the shock split loss inflicted by Norton when they clashed in Ken’s home town of San Diego last March. On that occasion, Norton snatched victory with a tremendous onslaught in the 12th and last round.

This time it was Ali, who, incredibly, called on his flagging reserves to put in a thrilling finishing burst. Ali’s big last round clinched the decision after a savage battle.

Ali was in probably his finest shape since he met Joe Frazier in March 1971. He came in 9lbs lighter than for the first fight with Norton, who was 5lbs less than he had been in San Diego.

But Ali failed to subdue the diehard, 28-year-old Norton and there were times when it looked as if Ali was in danger of being over-run.

Norton, who broke Ali’s jaw in the last battle, fought fiercely. He never gave up trying to nail the former world heavyweight champion.

His relentless pursuit earned Norton the vote of judge George Latka, who tabbed it 6-5 in favour of Ken. But judge John Thomas had it 6-5 for Ali and referee Dick Young’s vote of 7-5 in Ali’s favour decided the issue.

Ali had promised he would dazzle Norton with his speed and dancing. Indeed, Ali was up on his toes in the early rounds and looking much like the super-athlete of yesteryear.

He tried to psyche Norton by standing between rounds. But gradually the fast pace got to Ali. He sat on his stool for the first time in the interval before the fifth round and in the closing stages looked arm-weary and leaden-legged.

But Norton, too, was feeling the pace and they seemed equally tired as the fight reached its climax.

Although there were no knockdowns, the rivals got in some hard shots. Norton sought to batter Ali about the body and then come over the top with dangerous right hands and left hooks.

Ali snapped out left jabs, his feet sometimes leaving the ground. While many of Ali’s jabs fell short, a lot more made contact and Norton was bumped and puffy around the eyes after the halfway stage.

Probably Ali’s most effective single punch was his straight right hand, slammed in after the jab. He shook Norton several times with this shot.

The crowd of 12,100 who paid a Los Angeles record gate of £273,000 had plenty to cheer about. Most of the crowd were with Ali, almost willing him on when the People’s Choice came under pressure.

There were moments when Ali’s legs looked like giving out. It was alarming to see Ali standing in corners, arms down, as Norton smashed punches at him.

Ali’s corner screamed for him to move, but Muhammad seemed transfixed, finally lurching away as if by a supreme effort of will.

These were the moments when Ali’s speed deserted him, when it looked as if his very fast early pace might have taken too big a toll on his stamina.

Had Norton been able to put together a few more punches he might have toppled Ali in the seventh and eighth. These were rounds in which Ali often seemed rooted to the ring floor and took heavy punches.

But Muhammad survived and grimly fought back. No longer able to dance and prance, Ali lashed back flat-footed, meeting Norton with jabs and right hands, sometimes stringing together brief flurries.

Norton kept coming but Ali refused to be ground down. It was a battle of attrition, often punch for punch. Ali proved he is a real fighter but there was a time when Norton would not have been allowed to turn it into a slugging match.

The fight was tense and exciting from the very start. Ali looked comfortably ahead after four rounds but Norton began getting to him in the fifth, a round he won on the scorecards of referee Young and judge Thomas.

Ali stopped Ken dead with a perfectly-timed right hander in the sixth. But Norton began throwing everything he had at Ali in the seventh and suddenly Muhammad was under terrible pressure.

The eighth was a punishing round for Ali. Norton hit him with some brutal blows. One left hook rocked Ali back and he briefly grabbed the top rope for support.

But it was noticeable that Ken was tiring a little himself by the ninth. His massive effort of the previous two rounds had failed to crush Ali and now Norton had to ration his resources as Ali dug in his heels and fought his way back into the fight.

Norton made another concerted drive in the 10th and 11th rounds, both of which he won on all three official cards.

With points in the balance, Ali completely took the play away from a surprised Norton in the final round.

Ali opened up with volleys of punches, jabs, hooks, straight rights, uppercuts. For the first two minutes of the last round Norton could do little but try to cover up under this avalanche of punches, while the fans went wild.

Finally Ali’s attack subsidised and Norton thumped back at him. They banged away at each other up to the final bell, neither prepared to yield an inch. It was that kind of fight.

So Ali lives to fight another day. But it remains to be seen just how long he can go on producing such monumental efforts. At 31, time is visibly running out for him.