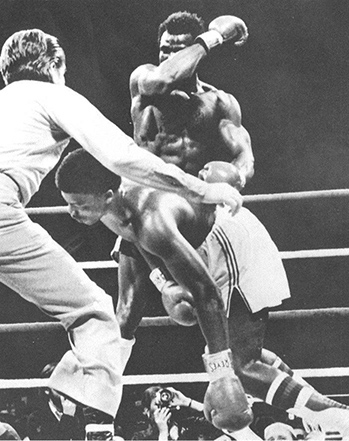 EXACTLY 35 years ago today, one of the sport’s most famous and unforgettable come-from-behind KO’s was scored.

Unbeaten John Tate was the WBA heavyweight champion and the largely unheralded Mike Weaver – then sporting an average looking 21-9 record – was the underdog challenger.

Having fallen hopelessly behind on points after 14 rounds, former marine Weaver knew he had to do something special to take the belt. This he did, landing a scorching left hook to the head that left former Olympian Tate flat on his face with just 45 seconds remaining in the 15th and final round.

Weaver’s stunning KO is the stuff of legend and the man dubbed “Hercules” remembers the win fondly all these years later:

Q: People still talk about your fight with Tate and the sensational KO you scored with just 45 seconds left in the fight. Can you remember the days leading up to that fight, and what your training camp was like?

Mike Weaver: “Oh, I can remember that fight like it was yesterday (laughs). Yes, we had a good camp, we had plenty of time to train; around two months. I was a determined man going into that fight.”

Q: And can you remember who you sparred for Tate?

M.W: “I think I had four or five guys, one of them was Raheem Muhammad. I’m not sure of the other guy’s names; I guess it was a long time ago (laughs). But I knew going in how I was a big underdog in the Tate fight. I was looked at [by Tate] as just another opponent, a warm-up type of guy even. He was supposed to fight Ali next. Muhammad Ali was going to be next for him if he won.”

Q: You sure tore up that script! Was that left hook you knocked him out with the best punch you ever threw?

M.W: “That was the best punch I ever threw, yes. My corner had told me to go out there and knock him out. That was the only way I could win. After the 14th round, I said a prayer and asked the Lord to give me the strength to win. But he was more tired than me, he was really tired. I knew if I could hit him I could knock him out.”

Q: You were way behind on points but did Tate ever hurt you in the fight?

M.W: “No, he never hurt me. I mean, all punches hurt, but he never once had me in any trouble or anything like that. Tate wasn’t a particularly hard puncher.”

Q: It wasn’t long after the loss to you that Tate’s life went rapidly down hill. He got into drugs and he passed away at the young age of just 43. Did you ever meet Tate or spar with him or anything after your fight?

M.W: “After our fight I never said one word to him. I never ever saw him again. But yes, his life did go downhill.”

Q: Have you ever thought about what might have been if you had lost that fight by decision, how it would have affected your career?

M.W: “Yes, I used to think about that quite a bit. Who knows what would have happened. I might have drifted away and maybe even quit fighting. I think I would have carried on but you never know.”

Q: Tate was set to fight Ali if he had won as you said. Were you close to fighting the great Ali after you’d got the win instead of Tate?

M.W: “Yes, I was supposed to fight Ali. We talked a lot about that and he [Ali] told me he was going to fight me. I was all set to go to the press conference to announce the fight and my manager told me we weren’t going. I said why and he told me that Ali was going to fight Larry Holmes. Ali then announced the Holmes fight.”

Q: Holmes badly beat the faded Ali. Do you think you would have beaten Ali at that time?

M.W: “Yes, I believe I’d have beaten him. I had sparred Ali, in 1972, at Lake Tahoe as he was getting ready to fight Bob Foster – my long-time sparring partner Ken Norton took me there – and we sparred four rounds. So Ali and I, we knew each other (laughs).”

Q: It’s probably for the best that you didn’t fight Ali at that time, as you might have badly hurt him. Do you agree?

M.W: “Yeah. He kept shouting out, ‘Hercules! Hercules!’ I said to him, ‘why are you calling me Hercules all the time!’ (laughs). He told me it suited me and it stuck. It was a great compliment. Right now, I’ve told myself I will drop 50 pounds before my birthday in June (laughs).”

Q: I guess you sparred countless rounds with Norton?

Q: Getting back to Tate. How good was he, or how good could he have been in your opinion?

M.W: “Tate was a good boxer, talented. But I had told him before the fight that I was going to knock him out. I just didn’t think it would take as long as it did (laughs). But that fight we had, that’s the one people ask me about the most today. That’s the fight they remember the best. That fight also sticks in my mind the most. I’m very thankful for that win and I think about it a lot, late at night. They can never take that away from me. I won the [WBA] title and I won it fair and square.”