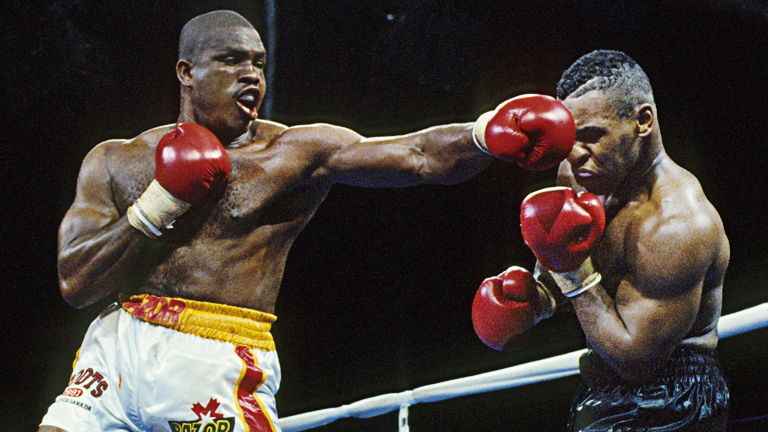 Mike Tyson's victory over Razor Ruddock was not enough to cover flaws, said the esteemed Harry Mullan from ringside in Las Vegas back in 1991

THE fight which was designed to underline Mike Tyson’s status as uncrowned heavyweight champion of the world served only to emphasise the extent of his deterioration, and to raise, perhaps for the first time, the possibility that he will not now be good enough to regain the title he held for more than three years.

His 12-rounds points win over Razor Ruddock looked impressive on the score sheets; judges Dalby Shirley and Art Lurie each had him ahead by 114-108, while Chuck Giampa made it 113-109, which was how I scored it. But the statistics do not even hint at the sudden and dramatic erosion of Tyson’s talent. This was a shabby, formless victory, and had Ruddock realised before the halfway stage how little he had in front of him, it could so easily have been a defeat.

There were some in the near-capacity crowd in the Las Vegas Mirage hotel’s outdoor arena who felt that Ruddock’s work in the second half of the fight, during which he rocked Tyson (15st 6lbs) repeatedly with wide left hooks and right uppercuts, had been enough to earn him victory. But few, if any, serious observers could support that view.

The issue was not whether Tyson deserved to win but whether he showed enough in doing so to indicate whether he can still beat Evander Holyfield, who holds three of the four versions of the world title which Tyson once had unified.

That match, suddenly, is not the one-sided affair it might have seemed after Holyfield’s laboured points defeat of the ancient George Foreman a few months ago. There now exists a real possibility that the precise and cultured punches of the champion could be enough to outweigh the raw power and aggression which seems, sadly, to be all that remains of the formidable fighter Tyson once was.

The controlled, rolling aggression which made him the most intimidating fighter of his time is just a memory. Where once he would blast his way through an opponent’s defences with an endless stream of hooks thrown from a bobbing crouch, now Tyson just charges in, all elbows and shoulders, and does not begin to throw punches until his head is resting on the opponent’s shoulder.

That crouching, near-irresistible attack used to be its own defence, but this Tyson takes far more than is necessary or desirable. Ruddock (17st) found him astonishingly easy to hit, sometimes holding his left arm fully extended as a measuring rod before turning it into a left hook to the side of the head.

It seemed that he could not miss Tyson, nor could Tyson miss him, and the result was brutal, elemental slugging match as they tried to club each other with massive single punches.

What little skills were on view came from Ruddock. Although an analysis of the punch statistics shows what a worthless exercise their compilation is. According to the stats Tyson threw 449 blows and landed 206, while Ruddock connected with 124 out of 246 attempts. That suggests a fight in which Tyson easily outworked and even outboxed his opponent (114 jabs thrown and 23 connected, against 49 thrown and 19 landed), yet nothing could be further from the truth.

Tyson was ignoring the hard evidence Ruddock had offered him when he claimed afterwards that “I’m still the uncrowned champion”. Ruddock was not available for comment, since he was taken to hospital for treatment to a jaw broken in two places, and for damage to his teeth which probably accounted for the blood which showed on his lower lip as he fought open-mouthed from an early stage.

The Canadian-Jamaican’s performance lacked nothing in courage. He came off the floor twice (in the second and fourth rounds) as he had done against Tyson in March and that in itself is further evidence of the extent to which the former champion has declined. It is inconceivable that the Tyson who annihilated good fighters like Mike Spinks and Carl Williams in a round apiece would have failed to finish a man whom he had floored twice.

To be fair, it seemed to me that the knockdowns owed as much to Ruddock’s bad balance as Tyson’s hitting power; on each occasion his feet appeared to be in the wrong position, and each time he got up almost immediately, looking more sheepish than stunned.

But it had been a dreadfully discouraging way to start a fight even against this half-power version of Tyson, and it says much for Ruddock’s character that having realised by the end of the sixth that he was in not with a monster but a mortal he went to work in earnest, and more than once had a real chance of victory.

Ruddock reaffirmed what Buster Douglas had already established in that dramatic fight in Tokyo 16 months ago: that any good pro of Ruddock’s size, who possesses a good left jab, a decent uppercut and a stubborn refusal to be intimidated can have reasonable prospects of success against this modified and diminished version of Iron Mike.

One wonders now, more than ever, what might have happened had Frank Bruno’s ambition matched his courage and endurance when he met Tyson down the road in 1989.

Tyson’s shoddy performance raises serious doubts about his ability to dethrone  Holyfield, but if Don King has his way we are unlikely to find that out for a while. King is instead working on a match between Tyson and the 43-year-old Foreman, to take place at the Mirage on November 1.

But that pairing, if it happens, may only serve to tell us which of the two ex-champs has gone back the further – and that should not have been a consideration when discussing Mike Tyson, 25 this week but already, it seems, a spent force.