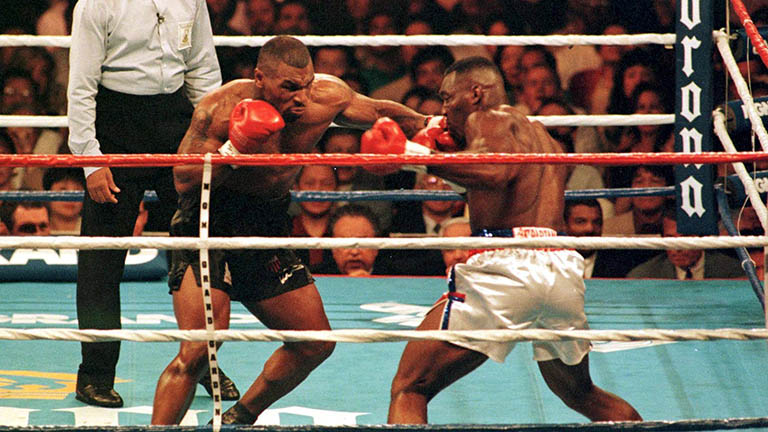 All too easy for MIke Tyson as Bruce Seldon goes down from from glancing blows in farcical defence of his title, writes Nick Bond

IN one of the more bizarre world heavyweight title fights, the WBA’s defending champion Bruce Seldon timidly surrendered his crown to Mike Tyson in 109 seconds at the MGM Grand on September 7, 1996.

Seldon appeared petrified as he climbed in the ring and was down twice in total from not one significant blow. The crowd booed it’s displeasure with chants of “fix… fix…” and even Tyson looked surprised at the ease with which the “Atlantic City Express” was derailed.

The first knockdown, barely a minute into the round, was little more than a glancing right hand that whistled over Seldon’s crown. The champion collapsed dramatically, spreadeagled to the canvas but sheepishly scrambled to his feet as referee Richard Steele reached the count of six.

Tyson, hungry for another first-round finish, on the signal of Steele was back on Seldon and swiped with a left that no more clipped the pawing Seldon who again folded along the ropes. Seldon rose again, before his legs gave a convincing jig which left Steele with no option but to end the “fight”. Time on the clock: 1 minute 49 seconds of the first round.

It was Tyson’s 39th inside-the-distance win and without doubt one of his easiest. Seldon “fought” every inch the 22-1 underdog that he was.

“You know how hurt I am right now?” pleaded Seldon “I came to fight, I came to win. I did not realise how hard he hits or how fast he is. He is a destroyer, and I am witness to that. The shot rattled my eyes, and I couldn’t see straight. I did not train 12 weeks to come here and take a dive. I am already a millionaire. It’s not about money. I’m sorry. I tried my best. He is a great fighter. He is a bad man.”

A gruesome epilogue to the night as rap icon Tupac Shakur was shot four times and murdered after leaving the fight. A Cadillac pulled up alongside the BMW in which he was travelling and opened fire. Shakur was a close friend of Mike Tyson.