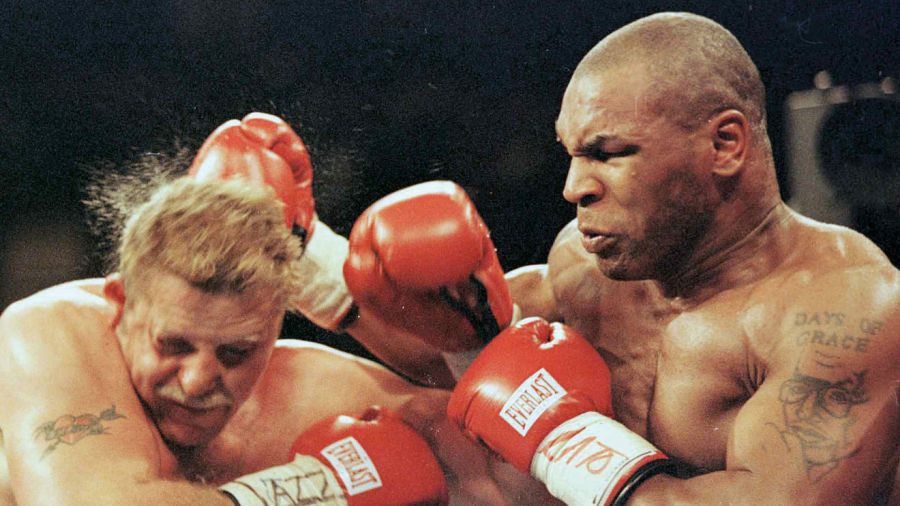 MIKE TYSON w ko 5 FRANS BOTHA
January 16, 1999; MGM Grand, Las Vegas, NV
MIKE TYSON was previously seen in a boxing ring spitting out chunks of Evander Holyfield’s ear. Banned from the sport, he was forced to undergo five days of mental examinations at Massachusetts General Hospital before he could get his licence back. “No ways those guys are sane,” Tyson said of the doctors, “they love torturing people’s minds. They would have made great Nazis.” Indeed, the sanity of those who allowed Tyson to re-enter the ring was again called into question when Mike didn’t exactly perform like a man eager to put old wrongs right. Frustrated by Botha and clearly not the fighter of old, Tyson stretched the rules to breaking point before rescuing his career with a vintage right hand in the fifth round.

DID YOU KNOW? Before the contest, a philosophical Tyson spoke of Cus D’Amato and the wishes his late mentor had for him. “Cus wanted me to get married at the age of 15 or 16,” Tyson, then 32, said. “But if I’d have done that I’d probably have killed everyone in my family by now.”

WATCH OUT FOR: Tyson infamously trying to snap Botha’s arm in a clinch is unpleasant in the extreme. Much more enjoyable, for anyone not in the Botha business, is the stunning one-punch KO that reminded everyone why we liked Tyson so much in the first place.