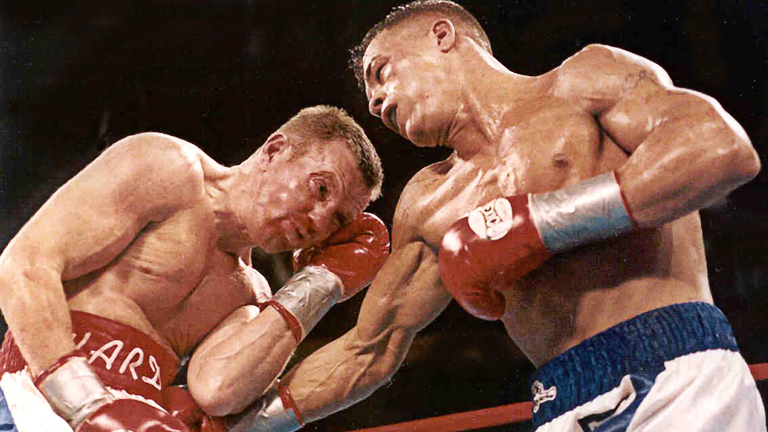 ON this day, May 18 in 2002, an epic, unforgettable trilogy was born as Micky Ward and Arturo Gatti rumbled for the first time. Meeting in Connecticut, the two warriors gave us a fight that was so great, many experts called it “The Fight of The Century.” The ninth-round was especially thrilling, with Emanuel Steward calling the round “The Round of The Century.”

Ward won via majority decision, and the two fierce yet hugely respectful rivals would have to meet again. Ward eventually lost the series 2-1, but the man who traded so much leather with Gatti is rightfully remembered as a great fighter. Known primarily for the three wars with Gatti, Ward engaged in a good number of other, almost equally brutal encounters.

Turning pro after having won three New England Golden Gloves titles, Ward, who was born in Lowell, Massachusetts on October 4 1965, streaked to 14-0(10) as a light-welterweight – 140 pounds being a weight Mickey would scarcely fight above throughout his entire eighteen year career. But then, in September of 1987, Ward would lose for the first of 13 occasions. Despite the number of defeats he would eventfully suffer, however, Ward became one of the most respected fighting men in modern day boxing history. In not one of these losses was Ward knocked out.

Moving on from his split decision loss to Edwin Curet, Ward would win some and lose others. A number of these setbacks came via unpopular and debatable decision, yet Ward never complained – he only fought again as soon as he could. Until 1991, that is. By 1991 Ward had lost seven fights – and following his seventh, being somewhat demoralised, Micky took three years out. Only to come back and give us the fights he is best known for today.

Nine wins followed, from June of 1994 to April of 1997 – all but two of them by KO before Ward received his one and only world title fight. Losing to Vince Phillips in an IBF light-welterweight title shot in August of 1997, Ward saw his chance pass due to a badly cut eye. He was TKO’d in round number three. This was the one and only time Mickey was ever stopped in his entire boxing life. From then on in, Ward, a wicked body puncher who had already established himself as one of the toughest fighters of his day, would thrill us constantly and on most occasions against top names from the sport.

Shortly after dropping a wide decision to the emerging Zab Judah in June of 1998, Ward travelled to London, England (his one and only fight outside of America) and scored a very good win. Unbeaten Liverpool fighter Shea Neary, a guy considered a tough and hard man indeed, was expected to go places; perhaps into a fight with Gatti. Instead, he met a man even tougher than himself and, before a partisan crowd that may not have quite known who or what Micky Ward was, Neary was crushed after eight all-action rounds. For the first time, British fight fans knew all about “Irish” Micky Ward. The once highly touted Neary only fought two more times before quitting; leaving it to his conqueror to rumble so fiercely with Gatti.  With his fine win Ward picked up the lightly regarded WBU title. There was nothing lightly regarded about Ward’s toughness and fighting ability.

After a further two fights, one a loss, the other a win, Ward had the first of his truly celebrated fights. Micky met the also teak-tough Emanuel Augustus in July of 2001. A ten round give-and-take war followed – one that so excited the experienced Teddy Atlas, who was commentating on the fight on ESPN, he was moved to implore viewers to call their friends and tell them to tune in also! The great fight, won by Ward by unanimous decision, was awarded Ring magazine’s “Fight of the Year” accolade for 1991. However, it  was soon followed by another, even greater fight.

As hard as it may have been to believe for those who had seen Ward-Augustus, Micky’s most brutally entertaining fights still awaited him. After losing to Jesse James Leija by technical decision in January of 2002, Ward fought the first of three incredible fights with Arturo Gatti. Fight fans the world over were treated to bouts as good as those from the golden era of the 1950s as a result.

What can be written about the Gatti-Ward trilogy that hasn’t been already? No-one who saw the three ten round non-title fights will ever forget them. The first fight was the best of the lot. Somehow, the two gutsy warriors managed to survive each other’s most fearsome assaults for a combined thirty rounds. Fight two may have been less violent than the initial bout, but fight three made up for it.

During the most intense thirty rounds of boxing action seen in the 1990s, there were broken bones, swollen eyes and mouths, bruised ribs, a busted eardrum, knockdowns, almost impossible comebacks, constantly switching momentums, lots of screaming – from both the fans AND the commentators and value for money like we’ve rarely seen. Without a doubt, these three light-welterweight fights were battles for the ages.

For the record, as if there are any fans that don’t know, Ward won fight one, Gatti fights two and three. But while Gatti carried on for a further four years after the trilogy was done, Ward called it quits on a brutally honest career as soon as fight three was over. Wisely knowing he had nothing left to give (or to prove) Micky retired at the age of 38.

Today, Ward is celebrated, he is enjoying life and his influence is felt far and wide across the sport. It’s truly a sad thing that Gatti, his friend and former rival, is not here with him. Both men have a unique place in boxing history.