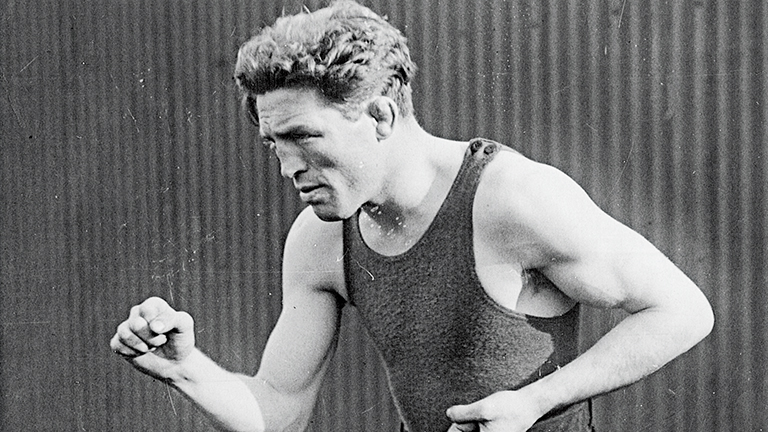 POUND-for-pound, Ted Kid Lewis is still probably the greatest fighting machine England has produced. He began boxing as a flyweight at the age of 14 and battled in every division right up to heavyweight. Yet he seldom weighed more than 10st 12lbs. He boxed 42 fights involving championships holding 10 different world, British, British Empire (now Commonwealth) and European titles. His phenomenal 20-year career reached its peak when he campaigned in the United States. He had almost 100 fights in five years, travelling vast distances criss-crossing that continent. He shared the world welterweight title with the highly skilled Jack Britton, boxing him 20 times altogether before eventually losing the world championship to him in 1921.

Lewis had a relentless attacking style with an inexhaustible supply of energy. Known as the “Crashing, Dashing Kid” he feared no-one, however big they were. “I really loved to fight. I would take anyone on – the bigger the name, the better,” he insisted.

Born Gershon Mendeloff in London’s tough East End in October 1894, he began boxing in the nearby Judeans Athletic Club just off Cable Street, which staged tournaments on Sunday afternoons. Eager to fight and earn some money, Lewis emerged as a prodigious talent. After winning the British featherweight title in 1913 at the age of 17 and adding the European title the next year, he went on his travels. Campaigning in Australia, he participated in five 20-rounders in 63 days, losing only one decision.

A growing boy, he had reached welterweight when he travelled to America at the beginning of World War I meeting the cream of the welterweights and middleweights. His series with Britton included 12 No Decisions. He won the title in Boston in 1915 on a 12-round verdict, lost it back to the American, regained it two months later and finally lost it again to Britton in March 1919 when he suffered a rare knockout.

Ted Kid Lewis returned to Britain after the war and immediately set about sorting out the home opposition. He won British championships at welterweight and middleweight with Empire and European honours thrown in for good measure. He was involved in another hot rivalry with highly skilled boxer Johnny Basham from Newport, Wales. Basham’s brilliant boxing always caused the swarming Lewis problems but he simply could not live with the pace and ferocity of Lewis’ attacks. They fought four times and Basham was stopped every time.

Such was Lewis’ self-belief that he thought he could challenge Jack Dempsey for the heavyweight title, reasoning that if he could beat Georges Carpentier for the light-heavyweight crown he would get a shot at Dempsey. Lewis met the Frenchman in 1922 at London’s Olympia. More than two inches shorter and two stone lighter, he was knocked out in controversial circumstances in the first round. His heavyweight title ambitions evaporated but Lewis went on fighting for another seven years, winning six more titles and having his last fight in 1929 at the age of 35 against old rival Basham. He won in three rounds.

In retirement he was involved in several businesses including a nightclub and was generous with his money, regularly driving through the East End in an open-topped car throwing notes and coins to the poor. He was often seen at ringside and remained popular and well-respected. He died in 1970 aged 76.

THE BIRTH OF THE GUMSHIELD