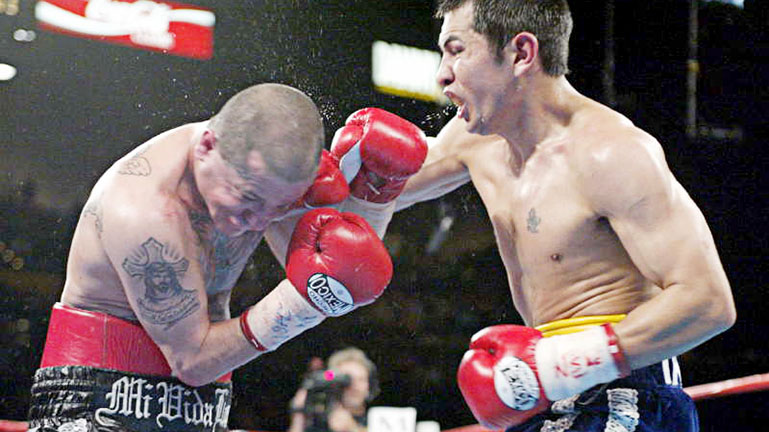 Marco Antonio Barrera and Johnny Tapia cast aside their friendship for their November 2, 2002 showdown

1. THE November 6, 2002 showdown between diminutive legends Marco Antonio Barrera and Johnny Tapia was loaded with mutual respect. Eighteen months before, Barrera defeated Naseem Hamed and was accompanied in the ring by Tapia. “He is just a gentleman that I respect. He is a hell of a fighter, a great world champion. Just a friend, just a boxer, just a friend,” Tapia said when asked to describe his relationship with Barrera.

2. BARRERA regularly wore shorts with ‘TAPIA’ emblazoned on them. Some observers wrongly speculated this was out of the Mexican’s admiration for Johnny. However, Mexicans often had two surnames, the second of which was reference to their mother’s maiden name, which in Barrera’s case was Tapia.

3. “HE is definitely very motivated for this fight,” said Tapia’s wife and manager, Teresa Tapia. “This is actually a big thing for him. He is wanting to fight the best out there and Barrera is definitely one of the best. He is actually one of Johnny’s favourite fighters, so this is something that Johnny has always wanted. He is very much looking forward to this fight.”

4. AT 35, a history of drug abuse and a 56-fight career behind him, Tapia was thought to be in decline. He had lost two fights to Paulie Ayala – which he claimed were dodgy decisions – and was thought to be very lucky to get the nod over Manuel Medina in the bout before this Barrera clash.

5. THAT ‘win’ over Medina handed Tapia the IBF featherweight title. It was his third divisional world title after winning major belts at super-flyweight and bantamweight.

6. THERE was no governing body title at stake inside the MGM Grand in Las Vegas but Barrera’s ‘Ring Magazine’ belt was on the line in this 12-rounder. Tapia relinquished the IBF belt to secure the shot at Barrera.

7. BARRERA was regarded as one of the sport’s premier fighters, pound-for-pound. After trouncing Hamed, Barrera had defeated Erik Morales in their rematch – being the first man to defeat his bitter Mexican rival – to set up this fight with Tapia.

8. AS expected, Barrera was too much for his fading challenger. Barrera won via unanimous decision with two scores of 118-110, and one of 116-112 confirming the Mexican’s dominance. The victor landed 323 punches compared to Tapia’s 124.

9. ONE year later, Barrera was destroyed by Manny Pacquiao in a huge upset but returned again, beating the likes of Ayala, Morales and Rocky Juarez to confirm his quality. However, after losing to Juan Manuel Marquez and Pacquiao a second time in 2007, his spell at the top was over.

10. TAPIA struggled to cope with his advancing age. Aware he was not the force he was, but also struggling to exist without boxing, he fought on until 2011 at a level far below his wonderful peak. He died suddenly in May 2012 from heart failure. He was just 45.