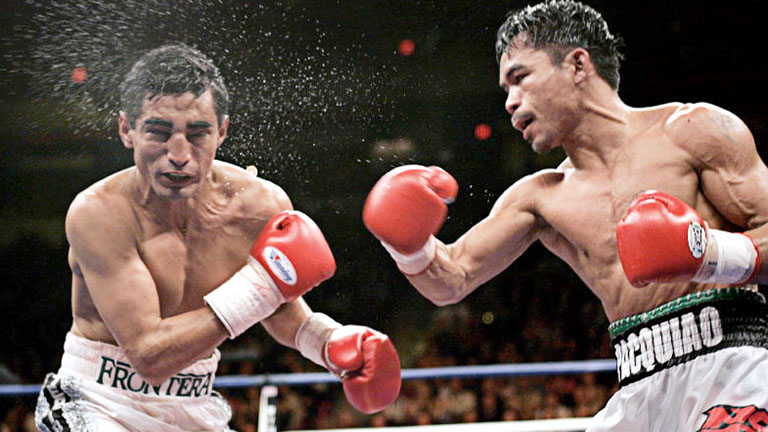 Erik Morales wanted to repeat his victory over Manny Pacquiao but the Filipino had other ideas, writes Matt Bevan

ON THIS DAY back in 2006, Manny Pacquiao’s reputation continued on its upwards trajectory as he avenged his defeat the year previously to Erik Morales, stopping the Mexican in the 10th round at the Thomas & Mack Center in Las Vegas.

Pacquiao defended his WBC International super featherweight belt that he had won the fight before, a 6th round stoppage win over Hector Velazquez and the contest was also an eliminator for the WBC title. Even so, to the majority, this was viewed as a world title fight.

After their first fight, which ended in a close unanimous decision in Morales’ favour, anticipation was high for the rematch and another clash between two of the biggest names in the smaller weight classes at the time.

Morales was already a three-weight champion, losing the super featherweight title in the final chapter of his famous trilogy with arch rival Marco Antonio Barrera and he was desperate to reclaim it. Pacquiao had won titles at different weights, and the aura surrounding him was growing at a rapid rate back in 2006.

The two entered the fight having both fought separate opponents in September 2005 on the same night. Pacquiao got the win over Velazquez, whilst “El Terrible” was defeated by Zahir Raheem as he stepped up to lightweight.

Following the defeat, many observers put their faith in “Pac-Man”, who made the weight with ease, whilst Morales struggled in camp and just squeezed inside the limit of 130lbs.

Pacquiao justified the faith, seemingly knocking Morales down twice early on, however the wily Mexican survived both attempts, when he held himself up on the ropes the first time around and then falling onto referee Kenny Bayless.

Pacquiao, who was guaranteed a $2 million purse, put his foot on the gas and really started to get to Morales, but the Mexican kept it close until the 10th round. Morales went down early and was quickly into survival mode.

But the unrelenting Pacquiao homed in on him, putting him down again heavily and forcing Bayless to stop the fight with 2:33 gone in what was to be the final round.

The Filipino moved to 41-3-2 whilst Morales slipped to 48-4 and the decline would continue for the future Hall of Famer.

He would take on Pacquiao again in October that year to lose his second trilogy, to go with the Barrera defeats, but this time he was stopped inside three rounds, before a loss to the lightweight champion David Diaz convinced him to announce his retirement. He did return three years later winning a light-welterweight title, but two defeats to Danny Garcia retired him for good in 2012.

After this win over Morales, Pacquiao had to wait two years to get his shot at the WBC title, where he beat Juan Manuel Marquez for the belt in the second fight of their long rivalry.