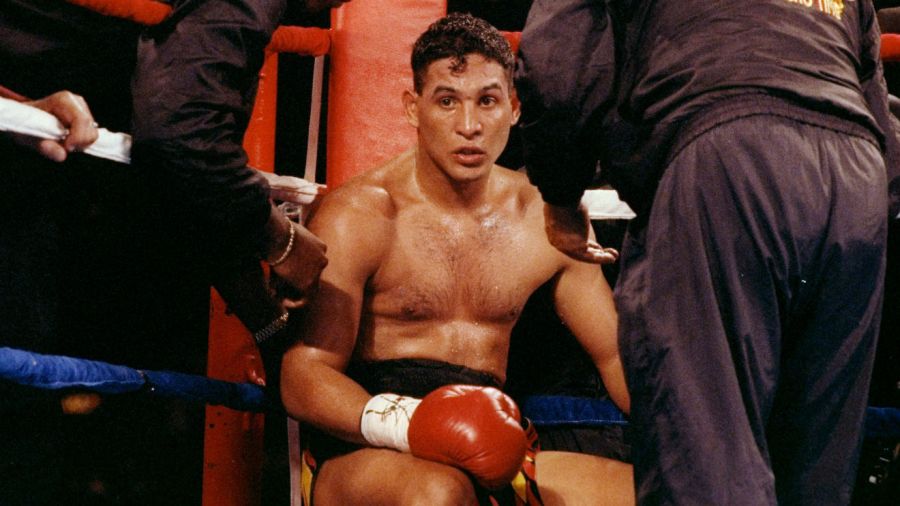 HECTOR CAMACHO w pts 12 JOSE LUIS RAMIREZ
August 10, 1985; Riviera Hotel, Las Vegas, NV
ORIGINALLY scheduled to take place on June 6, 1985, the flamboyant Hector Camacho’s shot at WBC lightweight champion, Jose Luis Ramirez, was postponed after the Puerto Rican injured his ankle while playing basketball (the contest was replaced with the cruiserweight clash between Alfonzo Ratliff and Carlos De Leon on a card topped by Michael Spinks-Jim MacDonald). By August, Camacho, who signed a five-fight deal with Don King for $500,000 and a brand new Lamborghini beforehand, was fit and raring to go. He entered the ring in a $800 robe, sequinned to the hilt – his appearance likened by commentator Barry Tompkins to the “good witch of the west” – and he proceeded to bedazzle his rugged foe. Decked in the third, Ramirez nonetheless lasted the course before losing a lopsided 12-round decision.

DID YOU KNOW? Camacho was suspended from the sport for 90 days two weeks after the fight due to testing positive for marijuana earlier in the year.

WATCH OUT FOR: Camacho calling out everyone from Ray Mancini to Larry Holmes in the aftermath.