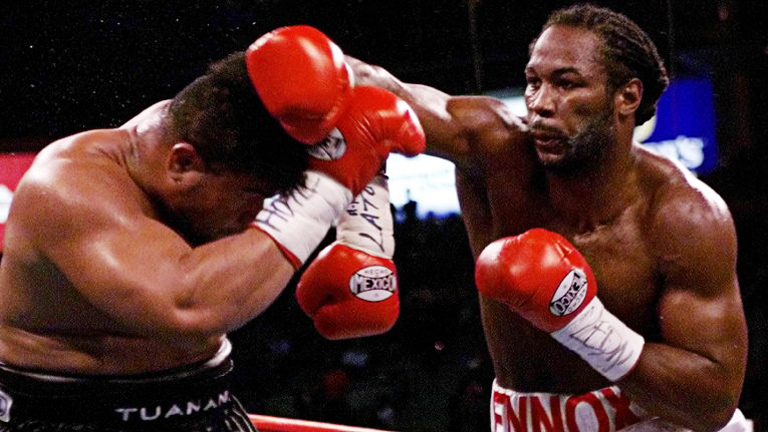 1. “I REALISE who I have in front of me,” said Lewis before the bout. “I realise Tua is powerful, but also that he hasn’t done anything to prepare for me. There is no one who can emulate me. When he steps into the ring he’ll say, ‘Whoa, what have I gotten myself into?”

2. TUA’S trainer, Ronnie Shields, thought differently: “Lewis has never fought anybody as strong as David. I wouldn’t be surprised if Lennox comes back to his corner and says, ‘This guy is a lot stronger than we’ve prepared for’.”

3. THE challenger was encouraged by Lewis’ loss to Oliver McCall, that came six years before, and the rickety but thrilling win over Shannon Briggs in 1998. “Lennox’s chin is very suspect,” said Tua. “Thank you for giving the ‘Tuaman’ this fight, but on November 11 I am going to punch out your lights.”

4. LEWIS countered: “Tua’s not going to be the man to make a name off beating me. He has been fighting guys who can’t take a punch. I’m concerned about his power but that’s his only asset. Unless I stick my chin out and allow him to hit it, he doesn’t have a chance to take me out. I won’t make it possible.

6. “I WAS doing all of the work in there,” said Lewis afterwards. “That’s what hype can do for a boxer when he doesn’t have the talent. Tua has a great chin, but he has to remember that you need more than a left hook.”

8. TUA was booed by many for failing – bar a brief moment in round three – to land any solid punches. “Things didn’t work out for me,” he said. “I kept the faith and I hung in there. I did the best I could.”

10. THE best fight of the night was a battle of veterans as John John Molina defeated Ben Tackie via split decision in a spirited light-welterweight 10-rounder.