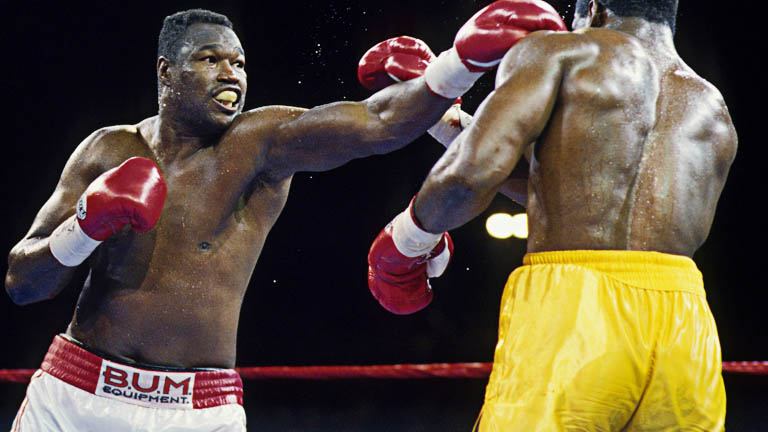 Larry Holmes made his first defence of the IBF heavyweight title on November 9 1984, writes James Slater

ON this day in 1984, long-reigning heavyweight king Larry Holmes met an up-and-coming future heavyweight belt holder in the colourfully nicknamed James “Bonecrusher” Smith. The fight took place at The Riviera in Las Vegas and Holmes proved to have far too much for his still somewhat inexperienced challenger.

Holmes was sporting a 45-0 record and Smith, who had lost his pro debut, being stopped by James Broad, was 14-1 as a professional. Holmes was the older man by four years at age 35.

Holmes was making the first defence of the newly created IBF title. Holmes, the linear heavyweight king, had relinquished the WBC belt the previous December and accepted the IBF strap. Money issues were Larry’s main reasons for ditching the green belt. The Smith fight was Holmes’ first fight in almost a year, since his easy win over Marvis Frazier in November of 1983.

Holmes had far too much experience and savvy for Smith, but the challenger, a big puncher, did manage to hurt Holmes a couple of time with his powerful right hand. “The Easton Assassin” was tagged and forced to hold in rounds five and eight.

In the seventh, Smith suffered a nasty cut due to a clash of heads. Holmes drew more blood later in the fight, a right hand badly injuring Smith’s left eye in round 11. In the following session referee Davey Pearl took Smith to be inspected by the doctor. The cut was deemed too bad for “Bonecrusher” to carry on and Holmes was awarded the TKO. Later, in hospital, Smith required 20 stitches.

Holmes, who had now been world champion for over six years, had won every single round on the cards of the judges and it seemed he would continue to hold the belt, and his perfect record, for a few more years to come. Instead, Larry would win just two more fights – beating David Bey and Carl Williams – before being shocked by light-heavyweight Michael Spinks; losing via controversial and close decision in September of 1985.

Smith lost his very next fight, to Tony Tubbs on points, as well as two of his next three outings after that. Still, in December of 1986, the college graduate won the WBA belt with a revenge win over Tim Witherspoon, the 1st-round KO being a shock to everyone.

Holmes retired after a second decision loss to Spinks and his “Jinx,” only to return to fight new king Mike Tyson in 1988. Holmes was brutally knocked out, for the sole time in his long career, yet he made another comeback in 1991 – this one lasting until his eventual retirement in 2002.

Smith didn’t hold the WBA belt for long, losing by lopsided decision to Tyson in a very dull encounter in his first defence, in March on 1987. Like Holmes, Smith also fought on well in to his forties, retiring in 1999.

Smith and Holmes did meet again before they exited the sport. In June of 1999, in what was Smith’s final bout. A 49-year-old Holmes stopped the 46-year-old Smith inside eight rounds.