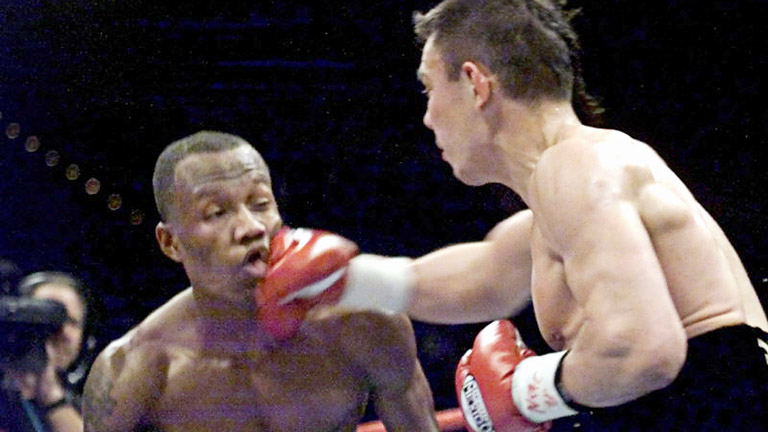 1. OPINION was split on who would win the light-welterweight unification showdown between WBC and WBA champion Kostya Tszyu, and IBF king Zab Judah. The bout was set for the MGM Grand in Las Vegas on November 3, 2001.

2. JUDAH, unbeaten at 27-0, sneered at his opponent’s chances in the lead-up, believing he was on the brink of an “easy” fight. “Tszyu’s style is made for me,” he said. “He’s strong, stands up straight and comes forward. His style is like Swiss cheese – full of holes.”

3. TSZYU, 27-1, was equally confident, although his prediction carried a little more respect and, as a consequence, a little more menace. “I study boxers and their styles,” the Russian-born Aussie said. “I’ve studied Judah and know what it takes to beat him… He wants to prove he’s the best and so do I. Everything has been said and now we have to prove who the great champion is.”

4. BUT Judah would not be dissuaded. “I’ll give him angles – I’ll be like a blur to him. Against a slick, sharp boxer with a good defence you figure Kostya’s got to get lucky [to win]. He’s got to land a good shot to knock me out.” Prophetic, indeed.

5. JUDAH got off to a fast start, his quick combinations proving bothersome to the 32-year-old Tszyu. A left uppercut appeared to hurt the older man, and a follow-up right-left forced him to hold on. Undoubtedly, Judah won the opening round.

6. IN round two, though, Tszyu finds his form. The American is suddenly getting tagged, leaning away from punches with his hands by his waist, convinced he’s too quick. Then Tszyu lands a long, perfect, right hand. It sends Judah to the mat. Undoubtedly keen to save face, the American jumps to his feet quickly and brashly points to the referee in an effort to show he’s fine. But he’s far from it. His legs drunkenly give way beneath him, and he drops again. He eventually rises, still unsteady, and referee Jay Nady waves it off.

7. THE Brooklyn fighter was incensed with being pulled out. He appeared to throw a punch before launching a corner stool in the referee’s direction. The unsavoury conclusion to the showdown unfortunately deflects some of the glory away from Tszyu – who started as a 3-1 underdog.

8. JUDAH tried, but struggled, to explain his actions: “I got caught going backwards. The fight should have gone on. I’m just looking for fairness… I was not hurt. When you’re in shape you get up straight away… He’s not that strong. I hit him with a lot of punches.”

9. THE Nevada Commission fined Judah $75,000 and suspended him for six months.

10. SHANE MOSLEY was at ringside and there was a suggestion afterwards that he would be willing to accommodate Tszyu at welterweight. But the champion had no intention of moving up in weight. “I make weight so easily,” he explained. “My dietician does a great job for me. I sweat so easily in the gym, I can’t believe it. I eat breakfast and lunch on the day of the weigh-in.”