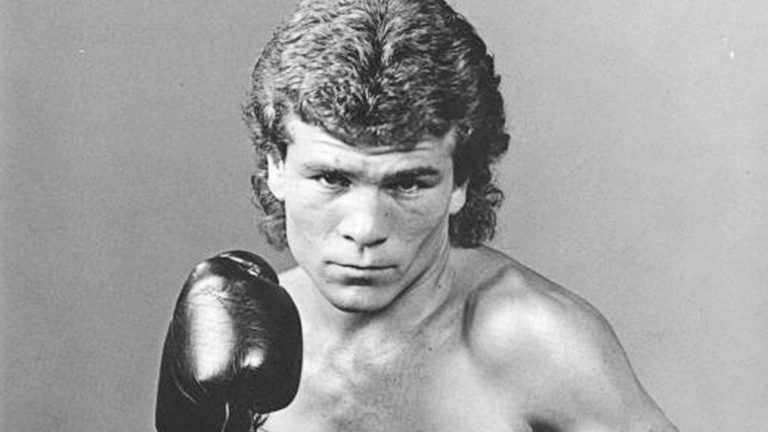 ON THIS DAY in 1992, two featherweights met in New York and engaged in a fierce fight that severely tested the mettle of both men. In fact, both Kevin Kelley of Flushing in New York and Troy Dorsey of Mansfield, texas threw so much leather, fans could have been forgiven for thinking it was going out of fashion.

Entering the bout, Dorsey, the former IBF featherweight ruler and a natural warrior who had cut his teeth as a world class kick boxer, was the older man by five years at age 29. Sporting a 12-4-4 record, Dorsey was to be the 26-0 Kelley’s first big test. And how the teak-tough Texan tested the slick southpaw from Queens.

The two rivals went at it right from the opening bell and to the delight of the fans packed into the Paramount Theatre, the pace continued unabated. Neither guy was willing to give an inch, and before too long the punch-stat recorders were threatening to blow a fuse. Fortunately, both Kelley and Dorsey were blessed with the required stamina to keep up their heroics without wilting. Between them, Kelley and Dorsey threw over 2,000 punches, plenty of which found their target. Yet, astonishingly, neither man as much as touched down, the war going to the 12th and final bell.

At the end of one of the most consistently exciting fights of the lower weight classes, both men felt they had won. Perhaps understandably when one considers the sheer effort put in on both sides, neither corner felt they had a losing fighter to towel down. There was no draw, however, so one man did unfortunately have to walk away with a loss attached to his record. Perhaps at least a little surprisingly after the mesmerising two-way action, was the fact that all three judges had Kelley winning via a substantial margin; the unanimous decision giving “The flushing Flash” victory by four points twice and by a whopping seven points on the third card.

It could be argued how Dorsey was never quite the same force again, wining just four of his subsequent ten outings. As for Kelley, his baptism under fire had caused no apparent ill effects. The gutsy lefty who proved he could both box as well as slug, went on to engage, quite staggeringly, in a further 45 fights, plenty of which were of the thrilling and gruelling variety. Dorsey would never again challenge for a recognised world title (although he did beat the talented Jimmi Bredahl in 1996, picking up the lightly regarded IBO super-featherweight strap), while Kelley would become the WBC featherweight king in late 1993, by way of a win over Gregorio Vargas. Kelley would hold the crown for just over two years and throughout his career he would play his part in a number of memorable fights.

To this day though, fight fans who were present at Kelley vs. Dorsey have a special place in their hearts for the breathtaking action they witnessed. And both fighters remember the sizzling encounter very well all these years later:

“The Dorsey fight was what I call a real fan’s fight. It was as close to death as you can imagine. I really thought Dorsey was going to die after the fight! That fight holds the world record for number of punches thrown, we threw 2,150 punches, man! Dorsey could take everything. I asked my trainer at the end of the fourth-round, ‘how can I stop this guy?’ He said, ‘you can’t!’ That was my welcome to the real world of boxing. It was a long fight and we were both beaten up and worn out. It was such a punishing fight.”

“With my kickboxing background and the training I did with Casey Malone, I had the stamina to do that. The human mind is the greatest tool we have, it really is! [I have] No bad feelings, but I think I won that fight. To have not gotten the decision – after all those punches! I was on him all night but I guess they had big things planned for him. But yes, I was tired after that fight. But I wasn’t as exhausted as he was – in the eleventh-round, he dropped his hands and he looked ready to go. But we are friends today. I’m glad the fans enjoyed that fight.”

Dorsey, and Kelley, can rest assured the fans did indeed enjoy their amazing fight!