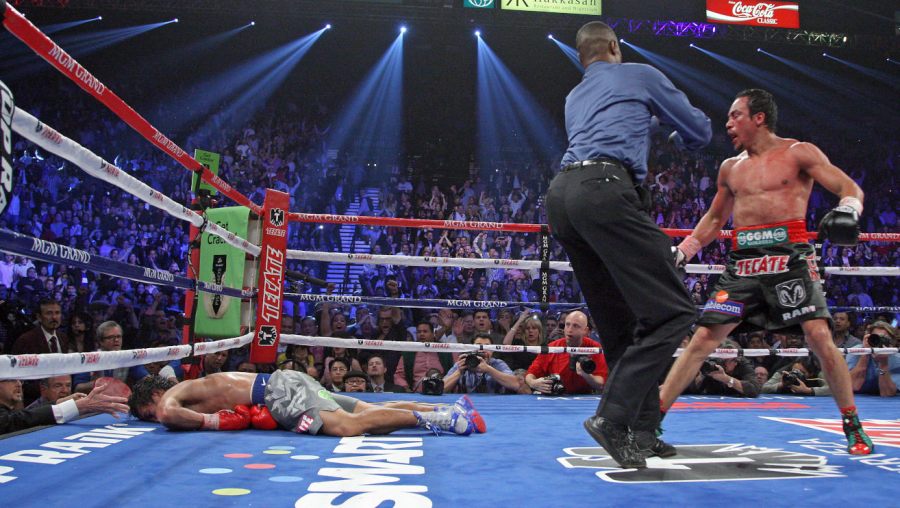 WHEN Manny Pacquiao – Juan Manuel Marquez IV was announced there was more than just a smidgen of discontent amongst members of the boxing fraternity who felt that the rivalry had been exhausted by the previous 36 rounds between the two living legends. This notion would swiftly be eradicated by rounds 37 to 42 of the tetralogy, which was arguably the best of the bunch. The bout would earn the distinction of ‘Fight of the Year 2012’, but will be forever remembered for one unforgettable and devastating fight-ending right hand at 2 minutes 59 of round six.

The previous three meetings between the pair were incredibly close fights that could have gone either way. Nevertheless, the history books will forever be engrained with two decision victories for Pacquiao and one 12-round draw after all three contests had gone to the judges’ scorecards. The three judges at ringside on December 8 2012 at the MGM Grand Garden Arena would not be needed.

The fight began brightly with Pacquiao’s trademark combinations and hand speed being enough to take the first two rounds on the cards, but the momentum changed in the third as a juggernaut right-hand from Marquez knocked Pacquiao down for the first time in 39 rounds between the pair. The knockdown raised the crowd to its feet and the noise to a near-deafening decibel level. Undeterred by this setback, Pacquiao would recover and throw caution to the wind in round four, waging war with Marquez who was more than willing to engage. Sporting a swelling below his right eye, Marquez was dropped in the fifth by a smooth counter left that levelled the knockdown count at one apiece. Once Marquez was back to his feet, blistering exchanges would follow with both fighters tearing into each other with ferocious and thunderous punching. The sixth round continued where the gruelling fifth had left off – Pacquiao detonating numerous damaging punches as he began to conceivably close in on a stoppage of the brave Marquez. Yet, with one second of the round remaining, Manny’s momentum was about to come to a shuddering halt.

As Pacquiao closed the range, popping out a double left jab, Marquez dipped to his left and exploded with the most destructive of punches to the Filipino’s nose which immediately disconnected Pacquiao from his consciousness. Tris Dixon, at ringside that night, described the game-changer as ‘‘a short, atomic right hand, laced with about five inches of menacing backswing [that] was rammed squarely in Pacquiao’s face’’.

Time stood still as Pacquiao crashed to the floor face-down, which left referee Kenny Bayless not even needing to administer a count. The fight was over.

Nearly 17,000 at the MGM Grand Garden Arena were silenced for a split second by the dramatic impact of fist on skull before the Mexican hysteria exploded. Mexican fight fans finally had their victory to celebrate over the great Manny Pacquiao and they did so jubilantly. The stark contrast between these scenes and the harrowing pictures of Pacquiao’s distraught wife, Jinkee, on the big screen would go some way to qualifying the colossal significance of Marquez’s historic one-punch knockout.

That night Marquez had his career-defining moment, whilst Pacquiao would be left to decide whether he would extend his lengthy and glorious ring career further or step away from the sport and focus on his demanding congressional vocation. It is testament to Pacquiao’s strength of character and passion for the sport that he chose the former and that three years on from his devastating knockout loss to Marquez, boxing fans were clamouring to see one of the biggest fights in history between a rejuvenated Pacquiao and still pound-for-pound king Floyd Mayweather Jr in 2015.