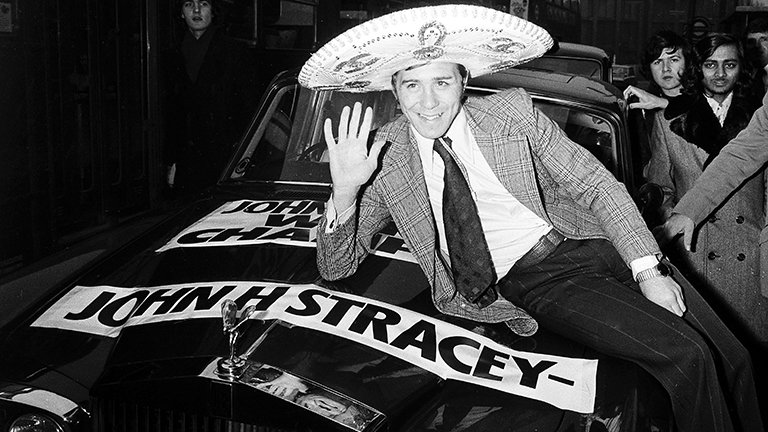 John H. Stracey tells James Slater about the best night of his career

EXACTLY 42 years ago today, a British fighter scored one of the finest away wins in the history of the sport. London’s John H. Stracey travelled to Mexico City to challenge defending WBC welterweight ruler Jose Napoles. Overcoming tremendous odds, Stracey, aged 25 and sporting a 42-3-1 record, managed to stop the classy Cuban who had relocated to Mexico a number of years before and was a genuine hero to millions there.

The fight took place in the afternoon, inside a bullring, with a hugely hostile crowd of over 40,000  literally baying for Stracey’s blood. Napoles, known as “Mantequilla,” because he was “smooth as butter,” was getting on in years at age 35 (some say he was a couple of years older) but he had won 16 of his last 17 fights (the loss coming against world middleweight king Carlos Monzon in February of 1974) and against Stracey, he was making the eleventh defence of his second reign as welterweight champion. Napoles’ record was an amazing 81-6 and he had beaten fine fighters such as Emile Griffith, Curtis Cokes and Hedgemon Lewis during his 17-year pro career.

The fight was almost an instant disaster for the Terry Lawless-guided challenger, as a left hook sent Stracey down in the very first round. Hurt and under fire for the remainder of the round, the visiting fighter had to dig deep to survive the opening three minutes. But Stracey was a massively determined fighter and he saw out the session, and came back to score a knockdown of his own in the third round, when a left hand forced Napoles to briefly touch down. The massive pro-Napoles crowd couldn’t believe it, and they showered the ring with debris; mostly consisting of seat cushions. Napoles was soon badly marked up, swollen and tired, a testament to the punching power and strength of Stracey. And then, in the sixth round, Napoles’ team – which consisted of the legendary Angelo Dundee – saw the referee dive in and call a halt to the now one-sided fight.

Napoles took quite a hammering on the ropes in the sixth and a relentless Stracey simply would not be denied. Napoles would never fight again. Stracey would return to England a hero and go on to retain his crown the following March.

Back in the summer of 2013, Stracey took time out to recall his great win over Napoles, and the subsequent fights of his career.

“The win over Jose Napoles was the best night of my career; that win over Napoles in 1975, which was actually in the late afternoon (laughs), is an obvious choice,” a beaming Stracey told Boxing News.

“That fight is still very vivid in the mind, especially the first round knockdown. I can still think back and take it all in. Not too many people gave me a chance to win, and to beat Napoles, especially in his own city of Mexico, was special. I was lucky to have fought one of the all-time greats; who had been there, done everything and had the T-shirt. Napoles was a great boxer, one of the very best in history without a shadow of a doubt.

“My toughest-ever fight was actually my next fight after beating Napoles; the Hedgemon Lewis fight (first title defence and a 10th-round TKO win for Stracey). He never stopped coming on. I think he was one of the toughest fighters and he was also a former world title challenger; he’d fought for the title four previous times and he’d been in with the likes of Napoles and Carlos Palomino. As a matter of fact, he got a (non-title) draw with Palomino and a lot of people thought he’d won that one. He was quick and every round you thought you’d stop him he came back. The only reason I beat him was because I was very, very fit. But he was a tough nut to crack. I was relentless in that fight.

“My fighter after that, the Carlos Palomino fight (L TKO12), that was my worst night in the ring, I’d have to say. The main reason is because if I’d had a rest and come in more refreshed, I think that might have made a big difference. I really should’ve had a break – I mean, three world title fights in six months is ridiculous. Palomino never really hurt me, but he caught me downstairs; he was a good body puncher no doubt. But he never hurt me to the jaw. [Hedgemon] Lewis was quicker than he was, and tougher. But I was in need of a rest and at the time that was unfortunately never going to happen.”

Despite losing his title after just one successful defence, Stracey’s name is secure in the history books as a British fighter who scored one of the biggest upsets in the welterweight division.