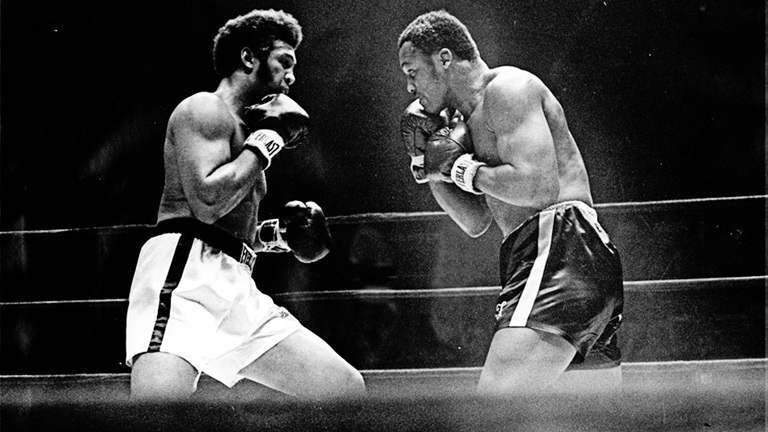 FRAZIER claimed his version of the title in March 1968 by stopping Buster Mathis in the 11th A month later, Ellis won a 15 round decision over Jerry Quarry in the final of a WBA tournament organised to crown a new champion after Muhammad Ali was stripped. A fight between the two champions was called for immediately but petty disputes scuppered any negotiations until they had nobody else to fight but each other.

KEN FINCH said in the Boxing News preview: “The plain truth of this New York title battle is that neither Ellis nor Frazier has great crowd pulling power and both have run out of opponents on their side of the Atlantic. The only course open is to make one champion.”

IRONICALLY, Ellis shared both the same hometown and trainer as the former champion, Ali. While Jimmy and Frazier were set to battle inside the ring, Ali was fighting in the courts to stay out of prison as a result of refusing his draft into the US Army.

THE two heavyweights battled on even terms only in the first round. Frazier was warned twice by the referee in the second round for butting as he charged in with his head down. Frazier staggered Ellis with a left hook in the third while he was backed up to the ropes but he was still able to tie Joe up. That is, until Joe broke loose and smashed in another left hook, this time in the centre of the ring, which spun Ellis half way around.

ELLIS kept Frazier at range for the first minute of the fourth round, but it was only a matter of time before Frazier bowled his way inside and flattened Ellis in his own corner for the first knockdown.

RISING at the count of eight, Ellis again briefly kept Frazier at bay before a trademark left hook from Smokin’ Joe laid Ellis on his back. The bell sounded at the count of five, but under New York State rules the count continues when a fighter is down at the end of a round. Struggling on his feet at the count of nine, he was in no fit state to continue and was duly pulled out of the contest by his trainer, Angelo Dundee.

AFTER the fight, Frazier said: “I’m gonna retire, wait for that big mouth Cassius Clay to come back and then I’ll whip him just like I whipped his sparring partner. I’m gonna play rock ‘n’ roll for a couple of years and wait for Cassius.” This impromptu retirement lasted a whole 30 seconds.

ALI, claiming he snuck into the arena to watch the fight with the fans, said: “Seeing that fight didn’t inspire me at all. I’m still done with fighting forever, Frazier and Ellis would just be my sparring partners if I ever came back.”

ON the undercard, Olympic gold medallist George Foreman maintained his unbeaten record with a points win over veteran Gregorio Peralta.