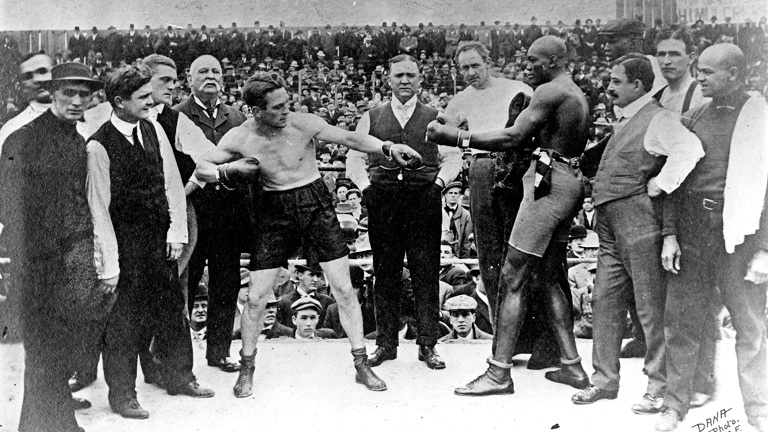 THOUGH the fight in question was actually filmed, this still being a rarity in 1909, the questions surrounding the Jack Johnson-Stanley Ketchel fight remain to this day. Is the much-told legend – of heavyweight king Johnson and middleweight ruler Ketchel agreeing to box what would today amount to an exhibition, to go the distance, only for Ketchel to attempt a double-cross and deck an unsuspecting Johnson, who then had to “make him pay” – true? Or was the bout in actuality a legitimate fight, with the much smaller man able to give one of the finest heavyweights in history one heck of a tough fight?

Johnson and Ketchel were friendly, at least to a degree, and the two privately agreed to fight and go the full 20 scheduled rounds, thus serving the motion picture people behind the event, who would make a bundle from the curiosity fight that was widely viewed as a mismatch. Fan interest was nevertheless big and the two men had to make the fight appear competitive – a first-round KO would be bad for business.

Then, according to the legend, the 209 pound Johnson, who was making the fourth defence of his heavyweight crown, “carried” the 160 pound Ketchel. Though Johnson decked his challenger twice along the way – in rounds-two and three – and proceeded to bloody his face, the legend, or the myth if you prefer, lives on. Johnson “played” with Ketchel and could have terminated the bout any time he wanted to. Then, suckering an unsuspecting Johnson with a “sneak punch” in round 12, Ketchel dropped the heavyweight champ and was almost instantaneously made to pay for it. Severely.

Johnson got up and smashed Ketchel with two monstrous rights that knocked him out cold (for a reported 10 minutes) and also ripped out a number of the middleweight’s teeth. Johnson, the legend goes (and the video of the fight appears to support this) is then seen brushing these teeth from his glove as the count is administered over the comatose Ketchel.

But is this really what happened that day, October 16th of 1909?

A superb piece written by B.R Bearden, refutes the legend. First of all, according to the article – and you can watch the available footage of this historical fight and make up your own mind – Johnson is in no way “carrying” Ketchel in the fight. In fact, both men do appear to be launching blows with, as the modern day saying goes, “bad intentions.” Look at the footage: is Johnson really pulling his punches? Ketchel clearly is not, his attempts at landing a haymaker being obvious to any viewer of the fight.

In fact, Johnson, conservative with his punch output, appears to be both wary and respectful of the smaller man’s venomous and well-publicised punching power. Johnson holds a great deal (and is booed for doing so), yet he really goes for it in an attempt to end matters on at least two occasions; in rounds two and three especially. Yet Ketchel gets through the crisis and fights on – and hard. If we were watching this fight today, maybe we would be able to judge more clearly, but going by the grainy, sometimes jumpy footage, the fight does look legit.

As for round 12 (the most viewed round of the fight, with many fans not watching the other available footage), it is clear Johnson is hurt seriously by the right hand Ketchel decks him with. And far from “bouncing straight back up with a smile on his face,” Johnson actually falls a second time as he attempts to rise from the hurtful knockdown. Only after steadying himself with both hands does the heavyweight king get back up, at the count of “8.” Then, with all his might, Johnson crashes two vicious rights into Ketchel’s jaw and ends the fight.

We then see Johnson “brush the teeth of Ketchel from his glove.” Or do we? Johnson does wipe at one of his gloves, but it is the left glove, not the right. His right hand then leant across the top rope (perhaps to steady himself), Johnson would surely have left any of Ketchel’s teeth where they were; embedded in his right glove.

Over the years, Johnson, something of a raconteur, told many tales about many of his fights. But was he always truthful? Ketchel, as historians will know, died less than a year after his loss to Johnson (Stanley always craved a second go at Jack), when he was murdered by a rifle-wielding maniac. So we have only ever had Johnson’s version of the 1909 fight to listen to. But Johnson’s version of some of his other fights (the loss to Jess Willard in 1915 for instance, where Jack told us he “took a dive” against the giant, and was not truly knocked out in round 26, this under the blistering Havana heat, but was instead merely shielding his eyes in the famous photo of him laid out on the canvas) are tough to believe.

Maybe Johnson, who held himself and his all-conquering talents as the heavyweight champion of the world so highly, could not admit that he had in fact had such a hard, hard fight – one he almost lost by KO (beating the count in that 12th-round by just two-seconds) – against a man he outweighed by at least 50 pounds?