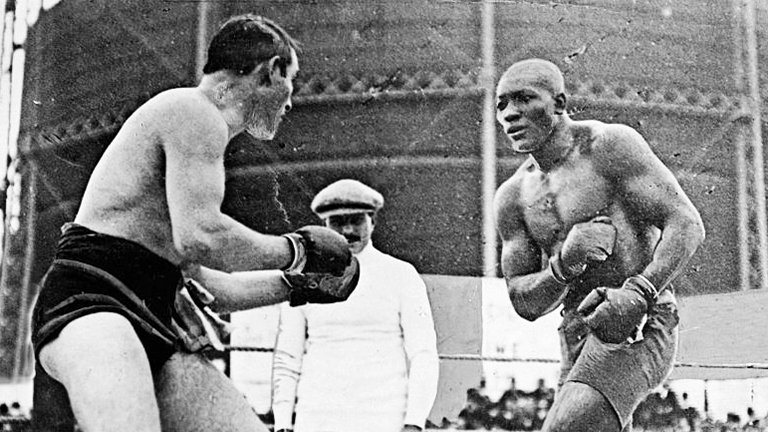 THE myth that Tommy Burns was avoiding Jack Johnson should be replaced by the fact the world heavyweight champion was holding out for a worthwhile purse. It came his way in 1908, when he was guaranteed a whopping $30,000 from promoter, Hugh “Huge Deal” McIntosh to defend against the black challenger on December 26 in Sydney.

BURNS – making the 12th defence of his title – gave away 24 pounds, seven inches, and was outclassed from the opening bell. At one point the cocky Johnson exposed his body and invited his opponent to hit him as hard as he could. Burns did just that, and Johnson barely flinched. The challenger seemed to be enjoying himself, and suspended Burns’ suffering as a result.

FORMER world champion Jim Jeffries had been approached to referee the contest but he wanted too much money – thought to be $5,000 – so promoter McIntosh officiated instead.

20,000 fans attended the outdoor stadium with another 30,000 thought to be outside the venue, sat on trees, clambering walls, and doing whatever they could to catch a glimpse of the action.

THE contest was stopped in the 14th round when the police rushed into the ring, concerned with the beating Burns was taking. But the real trouble was to follow. News that boxing had crowned its first black world heavyweight champion caused race riots and lynchings all over America.

JACK LONDON, the famous novelist, was in Sydney covering the fight for the New York Herald. He wrote: “The fight? There was no fight. No Armenian massacre could compare with the hopeless slaughter that took place today. The fight, if fight it could be called, was like that between a pygmy and a colossus….But one thing now remains. Jim Jeffries must emerge from his alfalfa farm and remove the golden smile from Jack Johnson’s face. Jeff, it’s up to you! The White Man must be rescued.”

JEFFRIES had retired unbeaten in 1905 and insisted he would not come back. A month after Johnson thrashed Burns he confirmed this again, while criticising Burns for defending his title against a black man: “Tommy Burns has his price—$30,000,” said Jeffries. “Burns has sold his pride, the pride of the Caucasian race…The Canadian never will be forgiven by the public for allowing the title of the best physical man in the world to be wrested from his keeping by a member of the African race….I refused time and again to meet Johnson while I was holding the title, even though I knew I could beat him. I would never allow a negro a chance to fight for the world’s championship, and I advise all other champions to follow the same course….All night long I was besieged with telegrams asking me to re-enter the ring. I answer them now as I have answered them hundreds of times: ‘I have fought my last fight’.”

HE did return. In the summer of 1910 Jeffries – inactive for five years – decided to come back and save the sport from the menace of Johnson. But the fight became an advert for racism so sickening, it’s astonishing that the fight was allowed to go ahead under such circumstances. Johnson dominated Jeffries before stopping him in the 15th round.

GET THIS WEEK’S BOXING NEWS, established in 1909 and the longest running publication on the market SAVE MONEY and GET THE BEST COVERAGE EVERY WEEK.