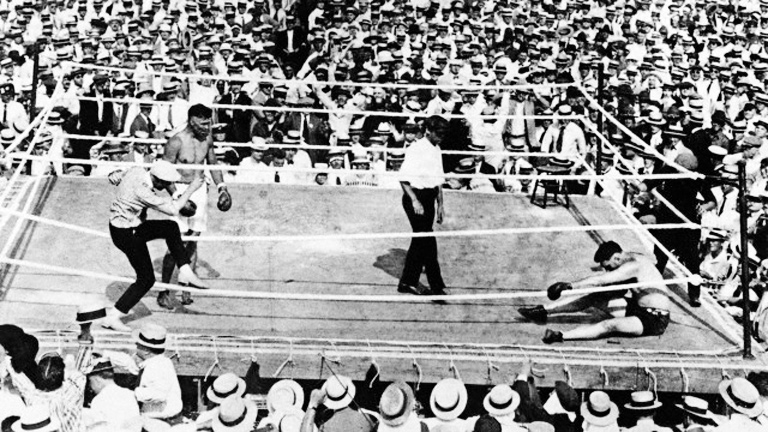 2. BUT former champion Tommy Burns did not share Willard’s optimism. Six months before the fight he picked Dempsey to beat Willard and advised all his friends to bet on the handsome challenger.

3. FIVE ounce gloves were used inside a 20ft ring. The gargantuan Willard was making only the second defence of his crown since famously toppling four years previously, and believed his 58lb weight advantage would be too much for the 24-year-old challenger.

4. BUT Dempsey, coming into the bout on the back of five consecutive first round knockouts, was a savage fighter of which the world had not seen before. He was respectful of the champion for the first minute and circled the ring, before launching a brutal attack that left Willard reeling.

5. WILLARD was floored seven times by the challenger in that opening round and took such a pasting, it was presumed the fight was over. The referee, Ollie Pecord, had not heard the bell and signalled that Dempsey was the winner, and content that his work had been done, The Manassa Mauler left the ring with arms aloft. But Willard, showing extreme bravery, had survived. Dempsey was recalled to the ring, and the slaughter continued.

6. THE champion managed to remain upright, just about, in the second round but the beating was hard to watch. Blood cascaded from Willard’s mouth and nose, his cheeks were swollen, his right eye was almost closed, and two of his teeth had relocated to the canvas.

7. STILL he fought on. He managed to land a few punches in an effort to keep Dempsey away, but they could not stem the spiteful tide. His left eye was now swollen, and according to reports, his ribs were broken.

8. AT the end of the session he was helped to his corner by second Walter Monahan. Willard, quite understandably, had endured enough and he signalled to the referee he could take no more. The fight was over.

9. WILLARD never regained proper hearing as a result of the pummelling. Until his dying day, Willard would claim that his conqueror’s gloves were loaded. There was, of course, no proof he could present besides his bludgeoned body.

10. DEMPSEY went on to become one of the greatest heavyweights in history, and his reputation remains today. But he never again recorded a victory as violent and spectacular as the one he enjoyed on July 4 1919.