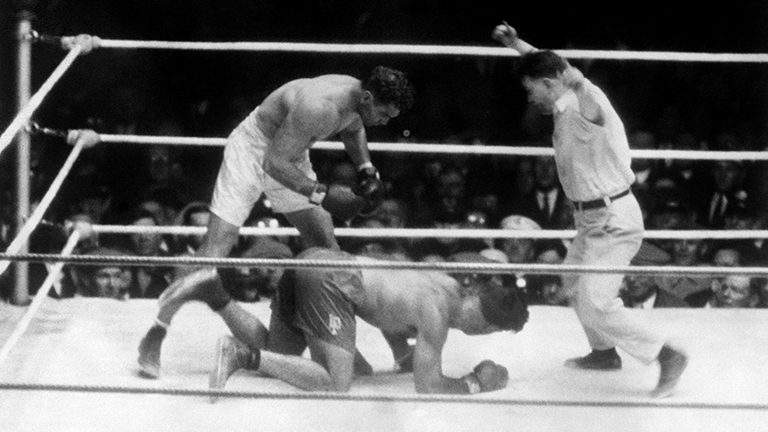 NOTHING bettered this wild brawl for pure heavyweight chaos… with the champion of the world, Jack Dempsey, knocking down his big, raw challenger Luis Angel Firpo seven times – and then almost losing his title when badly hurt and knocked out of the ring on September 14, 1923.

Also in that crazy first round Dempsey touched down twice – and in the interval was still so dazed that his manager, Jack Kearns, waved smelling salts under his nose. Then, like the great champion he was, Dempsey came roaring back to drop Firpo twice more in the second, the last time for the full count.

It was three minutes 57 seconds of mayhem, carried out before an official capacity crowd of 80,000 at the New York Polo Grounds – with half as many again milling around outside, unable to get tickets, and being kept in some kind of order by mounted police paid for by promoter Tex Rickard.

This was 28-year-old Dempsey’s return to New York after a gap of two years – during which Rickard had survived a sex scandal and the champion had broken the banks of Shelby, Montana, by defending there against Tommy Gibbons.

The champion’s return captured the imagination of the public so vividly it produced the second of Rickard’s fabled million-dollar gates, following the Dempsey-Carpentier fight across the Hudson in Jersey City in 1921.

Firpo, known as the Wild Bull of the Pampas, relied on physical strength and a looping, thumping right hand. He had nothing like Dempsey’s experience, speed or ability to fight inside.

Dempsey raced out at the opening bell, swung a long left hook and as he closed in on Firpo, his leg gave way at the knee and touched the canvas. He straightened up almost in the same movement, unhurt.

Suddenly Firpo was down from a body shot for a short count, then again, and a third knockdown put him on all fours. When the fourth knockdown from Dempsey’s short, savage hooks left him on his back, it seemed all over.

Firpo just beat referee Jack Gallagher’s count, but had barely straightened when Dempsey ran in and put him over again. This time the Argentine managed to back off when he rose, and gathered himself to toss that heavy right, one of which knocked the champion off balance enough to touch the canvas with his glove. Then it looked finished again, as two more knockdowns left Firpo in a heap near a corner.

Amazingly, he got up and suddenly flung his right hands, one of which landed flush and Dempsey was hurt. Firpo charged, caught Dempsey square and half-punched, half-pushed him back through the ropes, his legs flying up and his body hitting a ringside table.

Somehow, he scrambled back in time to beat the count but was under fire and still shaken at the bell. Revived by Kearns, Dempsey took over again, dropped Firpo heavily, then finished him off with one last attack. Firpo lay on his back, rolled on to his belly and was counted out.

The fight was later immortalised in the famous George Bellows painting.