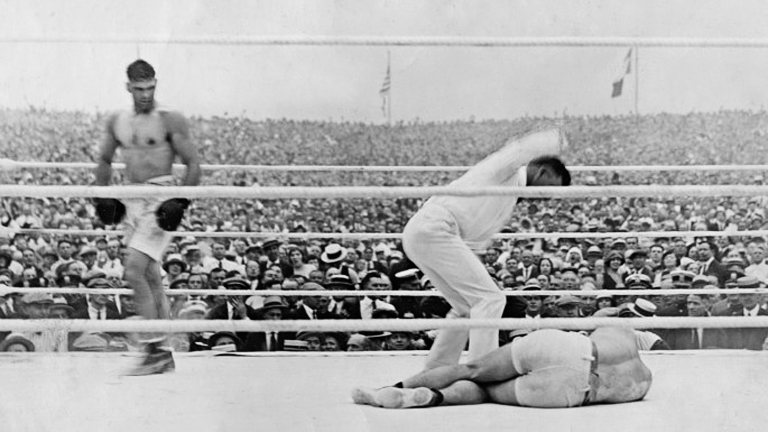 On July 2 1921 Jack Dempsey fought Georges Carpentier, bringing in over a million dollars

BOXING NEWS was 12 years old when the first million-dollar gate attracted headlines around the world. That was on July 2 1921, when Jack Dempsey fought Georges Carpentier in Jersey City, just across the Hudson from Manhattan.

Tex Rickard had an arena specially built on a piece of ground near Montgomery Street known as Boyle’s Thirty Acres. It took 60 carpenters and 40 labourers more than a year to construct and once Rickard realised the extent of the demand for tickets, he had them increase the capacity from 50,000 to more than 80,000.

The project cost Rickard $325,000 but his reward for that extravagant investment was an official attendance of 80,183 – some said it was closer to 90,000 – and gate receipts of an astonishing $1,789,238. He paid Dempsey $300,000. Carpentier, cast as the French war hero, was in marketing terms more than a mere challenger for the title, and was therefore paid $200,000. That left Rickard with a rough profit a close to a million dollars before tax.

Rickard is pictured seated centre (third from right), Dempsey is seated first left with legs crossed and Carpentier is seated second from right, next to Rickard.

Someone described the scene as ‘like a big bowl of honey covered in flies’. The fight was delayed by Rickard when bi-planes flew overhead. He did not want anyone taking unlicensed aerial photos – and not long before a pilot had crashed his plane within 200 yards of Forest Hills centre court during the US tennis championships.

The fight began about 15 minutes late – and lasted a little less than that. As Dempsey knocked out Carpentier in the fourth round, people in the $5 and $10 seats said the wooden structure swayed dramatically and creaked but did not fall.

Rickard had worried that Dempsey might kill Carpentier, whom he described as a nice guy who couldn’t fight, and so kill boxing. As it was, boxing was very much alive – and as the fight earned $400,000 for the taxman, very much approved of. The Golden Era of the 1920s had begun.