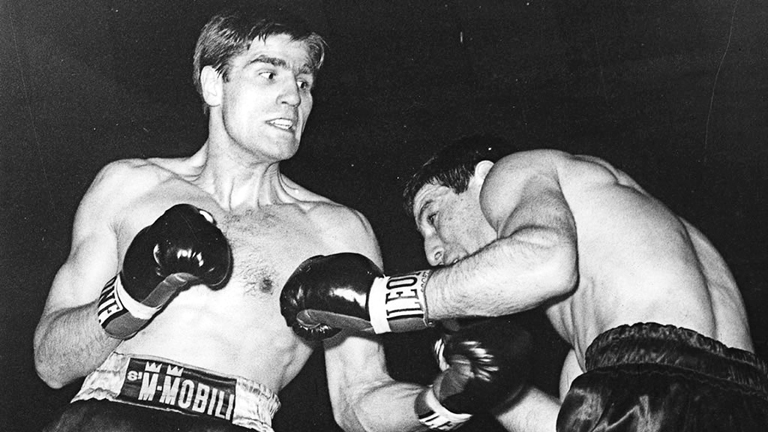 A BONAFIDE hero to the admiring Italian public, Giovanni Benvenuti had it all. With film star good looks and an all-round athleticism, the Trieste man rose to prominence at the 1960 Olympic Games in Rome, where he picked up a gold medal in the welterweight tournament. Before shooting to fame at the Games, Benvenuti had already secured multiple national amateur titles, as well as two European amateur crowns at light-middleweight. Prior to turning professional, he reportedly compiled a record of 120-0.

After storming to 29 wins in as many fights as a pro (including a points victory over travelling Cuban Isaac Logart), Nino earned a crack at the vacant Italian middleweight belt. He duly knocked out Tommaso Truppi in the 11th round.

A further 26 successes followed for Benvenuti. He made three national title defences in that period, as well as claiming the scalps of top opponents such as Gaspar Ortega, Teddy Wright and Denny Moyer (all w pts 10). A combined record of 56-0 put him in line to challenge Italian compatriot Sandro Mazzinghi for the world light-middleweight strap. In front of a passionate crowd, Nino finished his fellow countryman off in six rounds.

He suffered his first reverse in his 66th outing, losing his world crown on points to Ki-Soo Kim in South Korea.

Just under a year later, the popular stylist became a two-weight world king by dethroning the middleweight champion Emile Griffith in front of 18,000 fans at Madison Square Garden. This was the first in a trilogy of closely contested world title battles between the pair. Griffith claimed a victory in the rematch at New York’s Shea Stadium, before Nino won the rubber match at the new MSG. All three contests went to the cards.

The big fights kept on coming for Benvenuti, as he shared a ring with well-established competitors such as Dick Tiger and Luis Rodriguez. After eventually losing his world middleweight belt in 1970 against the legendary Carlos Monzon, Nino would go on to suffer a further defeat to the Argentine, before retiring in 1971.

His suave, handsome appearance intact after 90 professional ring appearances, the national idol went on to enjoy a brief acting career and success in the business world, also working as a commentator for Italian television.

Nino’s first 64 professional bouts were all held in Italy before he headed to Berlin, Germany, to halt Jupp Elze in the 14th round.

Prior to Nino’s world light-middleweight title tilt against Sandro Mazzinghi, the Italian public were clamouring for the rivals to meet in the squared circle. When they did go toe-to-toe on June 18, 1965, 40,000 fans filed into the San Siro football stadium to witness the coming together.

In only the second all-Italian world championship bout of all time, a sharp right uppercut to the chin in round six did the job for the Triestian. Boxing News reported that after the fight, “An enthusiastic crowd cheered wildly, stormed the ring and carried Benvenuti in triumph.”

In 1980, Benvenuti asked his rival Griffith to be the godfather to his son, Giuliano.