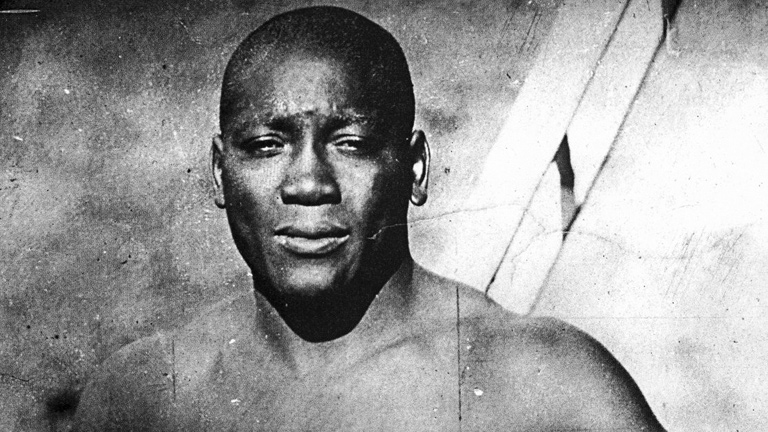 JACK JOHNSON was the world’s first African-American heavyweight champion, which not only puts him in sporting annuals but assures him a place in social history.

The heavyweight championship of the world wasn’t just a trophy in those days. It was a highly prized office and it mattered to White America, in the racist ferment of the time, that they held on to it. Black contenders were forbidden from even boxing for the title.

But Johnson smashed the colour bar and did it with gleeful resolve. Crucial of course was Johnson’s peerless ability in the ring. His skill made it clear he was the best boxer in America.

Racial prejudice however prevented the Galveston man from getting the title shot he deserved. It took determination to chase down world champion Tommy Burns but when they finally met in 1908 in Australia, Johnson took total command and won in fourteen rounds.

Johnson was never shy of taunting his opponents, nor those in the crowd baying for his blood. He used his technical skills to toy with his opposition. While Johnson made a statement in the ring, he also would not allow himself to be cowed in his life outside the ropes. He flaunted his fame and wealth, dressing flamboyantly and giving free rein to his desire to race fast cars.

‘Great White Hopes’ were dredged up, including a curious match with middleweight Stanley Ketchel, before James J. Jeffries, the previously unbeaten champion, was summoned from retirement. It had been six years since Jeffries had last fought and he laboured to get himself back to the fitness of old, with the added burden of White America’s expectations weighing on his shoulders.

The passions roused built their showdown in Reno on July 4 1910 up into a climatic event. But Johnson remained head and shoulders above his challenger. Jeffries got himself off to a reasonable start, managing to draw blood from Johnson’s mouth in the fourth round.

From then on the champion took control, weakening Jeffries and picking him slowly apart. He pounced in the 15th round, left hands to the jaw knocking Jeffries into the lower ropes where he was counted out.

African-Americans celebrated but several people died race riots that broke out across the country. That led the authorities to ban the distribution and transmission of film of the fight. The occasion of course remains a defining moment in boxing, and American, history.

Johnson was master of his own fate in and out of the ring. His association with white women outraged the society of the day, prompting unfair scrutiny of his private life. A charge for transporting a woman across state borders for immoral purposes was concocted and Johnson fled the country to avoid jail.

He defended the title in Paris and agreed to box the gigantic Jess Willard in Cuba. He met the 6ft 6ins cowboy in Havana in 1915. Willard couldn’t match Johnson for technique but his comparative youth, physical strength and stamina proved decisive in the Cuban heat. Eventually, in the 26th round, Willard leveled Johnson.

Losing the title did not make Johnson’s life easier. A safe return to America did not come together after the Willard fight and he lived in exile until 1920, when he surrendered to federal authorites and was incarcerated for eight months in Leavenworth prison. He boxed until he was 50, a sad end to a glorious career. He died in 1946 in a car crash as he drove furiously away from a diner that had refused to serve him.

His ringcraft alone makes a case for Johnson to be considered one of the greatest heavyweights who ever lived. His cultural impact is unparalleled. He paved the way for the champions who followed. Joe Louis notably adopted the opposite persona, more palatable to the general public of his day. Muhammad Ali, so famously his own man, followed the trail that Jack Johnson had blazed.

What else happened ON THIS DAY?

BOXING NEWS came along two years after Johnson beat Burns for the title and is still going strong. SUBSCRIBE TODAY