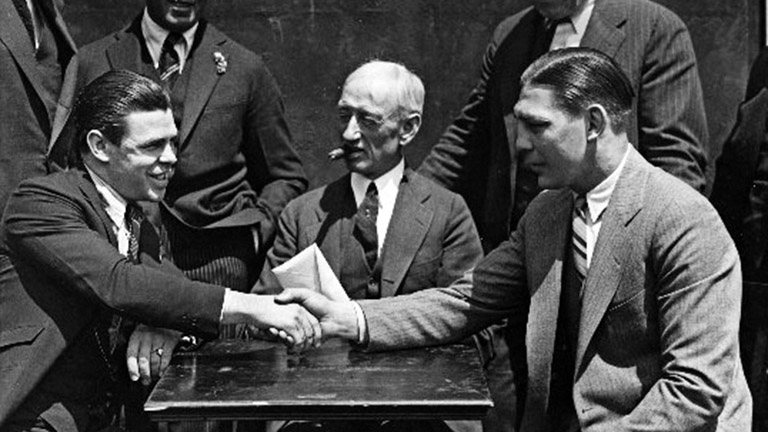 94 years ago Harry Greb beat his great rival in the ring and, legend has it, on the sidewalk

THE 1925 Fight of the Year was the definition of pound-for-pound super fight, featuring two greats in a bout that lived up to all expectations. Welterweight champion Mickey Walker was the brutal ‘Toy Bulldog’ who earlier that year had got the better of light-heavyweight king Mike McTigue over 12 rounds. The defending world middleweight champion Harry Greb was an incomprehensible fighting force able to withstand any blow and move and strike with the rapidity of a man much smaller that terrorised every fighter worth his salt up to heavyweight.

In a borderline street fight before more than 50,000 spectators that makes the widespread folklore of an plainclothes tussle taking place post-fight insignificant, the men slugged it out for much of the bout, with The New York Herald Tribune calling the second session ‘one of the greatest of all time’. Just when Greb pulled away Walker was there, defiant.

As the bout went on, Greb’s angles and added strength did take their toll on Walker, culminating in a 14th-round drubbing that had the welterweight king out on his feet.

Walker’s ability to spin a yarn is almost as lauded as his fighting prowess, but no one could describe the savage display of superiority Greb dished out in the penultimate round better.

“I was knocked ragtime, not off my feet, but I was silly,” he said. “You know, like a man walking in a dream.”

What Boxing News said in 1925
“THE two men stood toe-to-toe in round after round, hitting out for all they were worth. One is somewhat surprised to read that Walker should have elected to do his bit on these lines, as with wallop for wallop as the order of the day, the heavier metal was bound to prove the more effective. Greb is a curious, yet brainy fighter, who when hard pressed by a fleet-footed opponent, is apt to mill on the retreat, and is able to produce a terrific punch, even when jumping off the ground. Mickey may have been so impressed by the middleweight champion’s ability in this respect that he decided it would prove a better paying policy to make a sizzling battle of it. It was a policy that more than once came within an ace of success, though it came as nearly within approach to disaster. Each man is said to have been badly shaken in turn but, carried on, with Walker getting somewhat dazed in the fourteenth round, but managing to hold on until his brain cleared, and then putting up as hot a fight in the final stanza as in any of the previous ones.”

HOURS after their thrilling battle at the Polo Grounds on July 2, 1925, legend has it that Walker and Greb encountered each other at a lobster shop on Broadway. The pair then reportedly drank and danced into the early hours of the morning, before relations turned sour.

Mickey commented in The Spartanburg Herald: “After stumbling out into the morning air, all of a sudden Harry grabbed me by the back of the neck and said, ‘Just to show you I can lick you anytime, anywhere, I’m going to give you a walloping right now.’ He made a rush for me, so I stepped back and let him have a left hook on the chin. In a second, we were all over the street.”

Allegedly, a police officer witnessed the incident and bundled the pair off the block. According to Walker’s account, Greb rang him shortly after the scuffle and stated, “Mickey, I’m sorry for what I just did, but don’t forget – I can always lick you.”