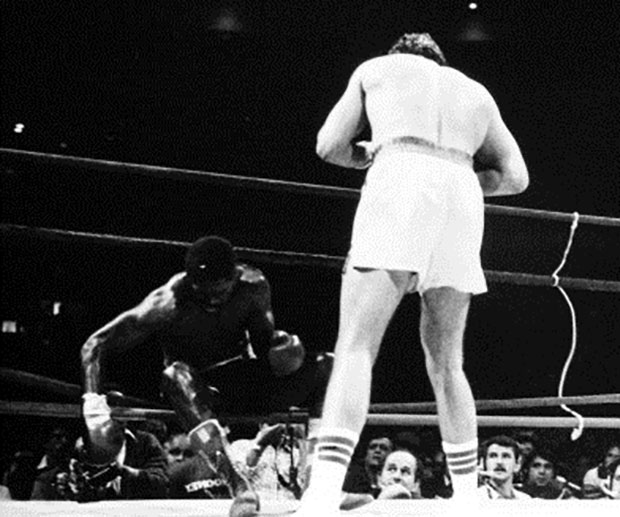 Following this bombastic win over Ron Lyle, Gerry Cooney was expected to get to the very top, writes James Slater

ON this day in 1980, towering Irish American heavyweight sensation Gerry Cooney scored another crushing knockout on his way towards apparent glory. The 24-year-old “Great White Hope” with the lethal left hook met experienced campaigner and former world title challenger Ron Lyle at the Nassau Coliseum in Uniondale, New York. The result was a first-round win for “Gentleman” Gerry.

1. COONEY held a 23-0 record when entering the ring with former prison inmate, Lyle, who was 39-6-1. With a combined 47 KO’s between them, both heavyweights were considered big punchers.

2. COONEY was getting used to facing veterans, his fight with Lyle sandwiched in-between fights with 31-year-old Jimmy Young and 38-year-old Ken Norton. As with Lyle, Cooney stopped both big names.

3. LYLE had also been in with Young (twice) losing decisions on both occasions, as well as another common opponent in Gary Bates – who he had KO’d in the third round; a round quicker than Cooney had KO’d Bates.

4. LYLE badly needed a win over Cooney lest he face sliding into obscurity. The ageing slugger had been stopped three fights previously to facing Gerry, when the little-known Lynn Ball scored a second-round TKO over him. As things turned out, Lyle would not box for almost fifteen years after swapping leather with Cooney.

5. NOT that Lyle had the chance to exchange many punches with Cooney. The younger, bigger and faster man came right out on the night of October 24 1980, with Cooney soon trapping Lyle in a corner and unloading his vaunted left hook to head and body. It was a wicked left to the body that ended matters, with Lyle spilling out through the ropes and coming to rest on the ring apron with just 11 seconds remaining in the opening round.

6. COONEY impressed TV commentator “Sugar” Ray Leonard, who remarked how he thought “a lot of heavyweights will respect Gerry Cooney from here on out.” Leonard had also remarked how he felt Lyle had “looked trim” and was in shape for the fight.

7. AMAZINGLY, the soaring Cooney would win just four more fights before hanging up his gloves. Gerry would ice Ken Norton in 54-seconds in May of 1981 and would then lose his title challenge of Larry Holmes in the summer of 1982. Following the 13th-round TKO loss to Holmes, Cooney would box only sporadically – winning three comeback bouts across the years 1984 to 1986, and then losing to Michael Spinks in 1987 and George Foreman in 1990.

8. LYLE would retire after being blitzed by Cooney, only to launch a bizarre comeback in 1995, when aged 54. Ron would box four times against limited opposition, winning all four by stoppage. Lyle said he was chasing a rematch with George Foreman, who he had rumbled with in an epic fight in 1976. “Big” George had miraculously regained the WBA and IBF heavyweight titles in late 1994. Foreman was not interested in a return meeting with his old foe.

10. TODAY, 58-year-old Cooney, well invested, enjoys as he puts it, “a great life.” He hosts a weekly radio show and remains a popular figure with fight fans. His final ring record reads: 28-3(24).