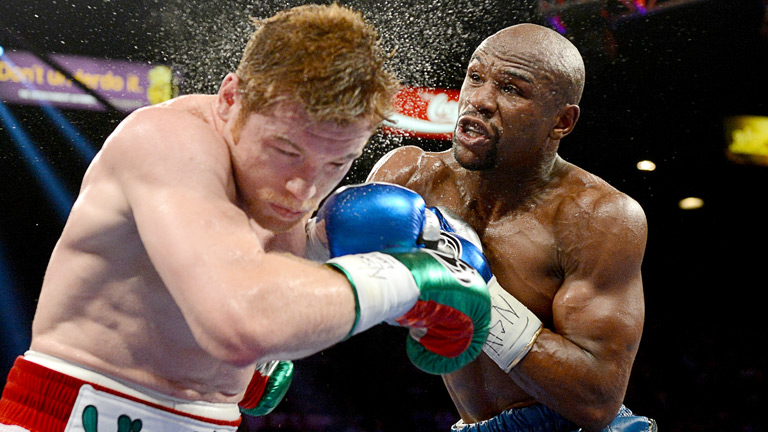 FLOYD MAYWEATHER w pts 12 CANELO ALVAREZ
September 14, 2013; MGM Grand, Las Vegas, NV
THOSE who now belittle the impact that Floyd Mayweather had on the sport should look again at the numbers this superfight generated. Following an 11-city promotional tour – spread over two countries – tickets for this super-welterweight tussle, costing between $350 and $2,000, sold out within 24 hours of being released. Add to that $20m haul the $150m generated from US pay-per-views and the gate receipts from screenings at 550 cinemas and this broke records as the highest-grossing fight in history at the time. The contest itself was one-sided, Mayweather was simply brilliant. An argument can be made for him winning every round; the cards (117-111, 116-112 and that eternally mysterious 114-114) flattered young Canelo.

DID YOU KNOW? Going into this bout the WBA listed both men as their 154lb champion. Alvarez, who also held the WBC title, was the ‘unified’ champion and Mayweather was the ‘super’ champion. Seven years on, the WBA continue to behave so shamelessly, so greedily and so nonsensically.

WATCH OUT FOR: The reaction of Mayweather when he hears that it’s a majority decision and that CJ Ross had somehow scored 114-114.