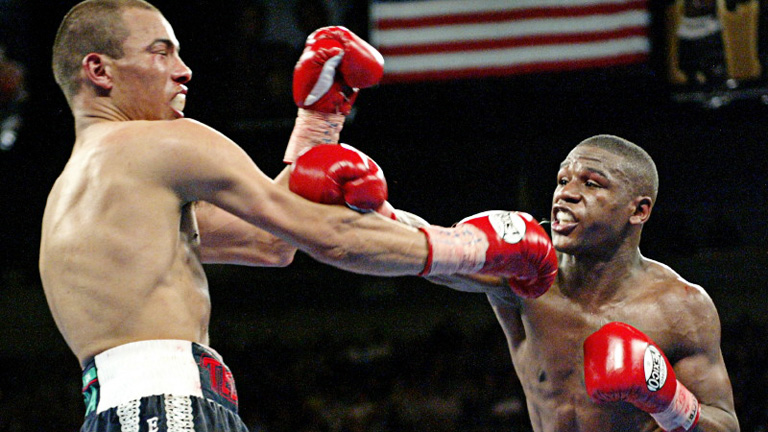 FLOYD MAYWEATHER got a talking-to from his grandma Bernice after another woeful piece of public relations, then got his act together enough to outpoint Jose Luis Castillo in their eagerly-anticipated return for the WBC lightweight title on the Wladimir Klitschko-Jameel McCline card.

Mayweather had dethroned Castillo in April on a unanimous decision that did not please everyone, least of all the Mexican, who felt his late-rounds pressure had given him superiority.

Mayweather blamed a shoulder injury for his fade-out.

This time, although the official margin was closer, there were no arguments. The Las Vegas-based champion was slick, quick and careful, working his left hand mostly on the retreat and earning 115-113 cards from Daniel Van De Wiele (Belgium) and Ken Morita (Japan), and a 116-113 tally from Larry O’Connell.

Some thought Mayweather won far more clearly, but I had 115-113 too because the 25-year-old American posed, defended, held on the inside and threw single punches instead of committing himself to hard work.

He won because he was too precise, too accurate and too talented for a man who unravelled mentally over the second half of a disappointing fight. I was unimpressed.

“I told everyone it would be easier this time,” said the champion. “My plan going into this fight was to box, to box more, be smart and [throw] no power shots.”

Maybe that’s intelligent, but he was well short of the skills exhibited by the lightweight Oscar De La Hoya, for example.

As a super-feather, Mayweather had moments of brilliance but on this display there was little to get worked up about. In essence, he fiddled Castillo out of the fight and in 12 rounds threw fewer than 400 punches, the great majority of which were jabs. Wladimir Klitschko was booed by a crowd wanting more activity but the 6ft 7 in, 17st-plus Ukrainian threw and connected with more in 10 rounds than the 5ft 7 1/2in, 9st 9lbs Mayweather did in 12.

Mayweather deserves credit for defensive expertise, but as most of his punches were thrown either on the retreat or with one eye on not getting hit, they lacked power.

Castillo was busy, especially in the first half, but inaccurate.

Mayweather’s relationship with promoter Bob Arum has deteriorated to the point where one wonders what the future holds.

Arum is a pragmatist but admits the end of their deal can’t come soon enough. The world champion is a difficult character. He sulks about what he perceives as negative media reaction and insufficient recognition of his talents and charity work.

To which the only answer is he, not us, picked up a conviction for assaulting the mother of one of his three children.

He, not us, called a $12 million offer from HBO a slave contract. He, not us, demanded a promoter shell out $150,000 for an advertisement to match the image of Britney Spears projected on to the MGM Grand.

This week Mayweather was suggesting he was so fed up with the business he might retire and then failed to honour the agreement to appear at the Thursday press conference.

“Does that make sense? I feel sorry about this, I really do. I’ve promoted Floyd Jnr since the beginning of his career and I want to apologise for him.”

When asked why the champion had not come, Arum added: “Siegfried and Roy ‘disappeared’ him! I don’t know. If I could give you an answer, I’d give it.” At the weigh-in 24 hours later, Mayweather was much more amenable, smiling genially for photographs and shaking hands with Castillo and his camp.

Why the transformation? The clue came in a chance conversation Sky commentator Ian Darke had with Floyd’s grandma Bernice. She, it appears, had given him a timely lecture on his behaviour.

“I told him,” she said to Darke, “you can’t go on upsetting people like this. It’s not the right thing to do.”

And sure enough, after the fight he was in the media room for far longer than necessary. Chatting and posing for photos.

Castillo, a one-time sparring partner of Julio Cesar Chavez from Sonora, Mexico, started well enough. He was full of pre-fight belief, saying he would not, this time, need four rounds to work out Mayweather’s style. He applied educated pressure in a quiet first.

Mayweather held on the inside, missed with a right lead and let go one classy burst, but mostly Castillo cut down the ring and looked to work. His left hooks were effective.

The second was close. Mayweather was tentative and didn’t lead enough, was out of distance for the most part, but succeeded in negating Castillo’s pressure.

Certainly, Mayweather won the third, discouraging Castillo from trying to jab by beating him to it and countering sharply with a right hand here and there.

Mayweather also made Castillo miss clumsily and the former champion careered across the ring into the ropes. Jose Luis did land a right in the closing seconds, but that wasn’t enough.

Already it was reminding me of the Chavez-Pernell Whitaker fight in San Antonio in 1993.

Castillo (9st 9lbs) put in a good attack early in the fourth and the quality of his pressure improved. Mayweather’s jab drilled in often enough to bloody the challenger’s nose, but for all his ring-generalship, Floyd’s workrate was very low. In the fifth he landed a thudding right hand but eased off. Castillo landed a right uppercut as the champion swayed the wrong way on the ropes, then two left hooks to the body and Mayweather clung on and smiled.

He spoiled the next attack, but again it was Castillo doing the work.

The sixth could have gone either way. I gave it to Mayweather. He boxed well in patches but again backed off too much and, for a time, lost his rhythm. Castillo hunted him down without having a great deal of success.

The seventh, too, was close. Mayweather (9st 8lbs) looked relaxed, boxing well at times but was shoved around in clinches and Castillo rallied well late in the round.

However, from round eight to 11, Mayweather established control and frustrated Castillo on the retreat. He said later his left hand was hurting, which is why he used the right leads more, but his uncle and trainer, Roger Mayweather, told him after the eighth:, “Don’t throw the same punch every time. Mix it up.”

Castillo still looked as if he wanted a war, but Mayweather wouldn’t have any of it. Castillo brawled on the inside and was warned to cut down on the rough stuff.

He had punched low at times, too, but mostly when Mayweather was mauling and spoiling, and although Floyd complained about referee Joe Cortez afterwards, the official was right to let a certain amount go. There was nothing of any great danger.

Mayweather dominated the ninth mentally as much as physically. He took a left hook early on, then outjabbed and outworked him. Castillo brawled in the 10th again but had little or no success. The champion was still too negative for my tastes but picked his punches, including a sharp right lead.

Although he was still in touch on the cards, Castillo was fading out of the fight and Mayweather blocked his attacks easily. A classy left uppercut from the champion smacked home in the 11th.

Strangely, in the last, Mayweather closed things down, taking very little but doing hardly anything of note himself, and allowed Castillo to bustle away with more effect.

Floyd was bundled over, twisted and turned, picked singles and looked as if he didn’t want to work.

Castillo kept throwing punches, took the round and narrowed the gap again, but it was some way short of a top-quality encounter, even though these two had the best case for being the leading lightweights in the world.

A third meeting is unlikely in the near future. Mayweather talked, before moving up to lightweight, of cleaning up the division and going on to fight Kostya Tszyu at light-welter, but on this evidence doesn’t relish taking on lightweights in a test of strength.

He would have to fight Tszyu the same way.

It’s possible he could do it, but it may also be that this once-exceptional talent just can’t go through the weight divisions and stay positive.

If that is the case, he will just have to go on using his skill to steal decisions. And that could be interminable.

At least he made a fan out of Castillo, who acknowledged defeat this time. “I couldn’t figure him out,” he said. “He fought a more intelligent fight.”