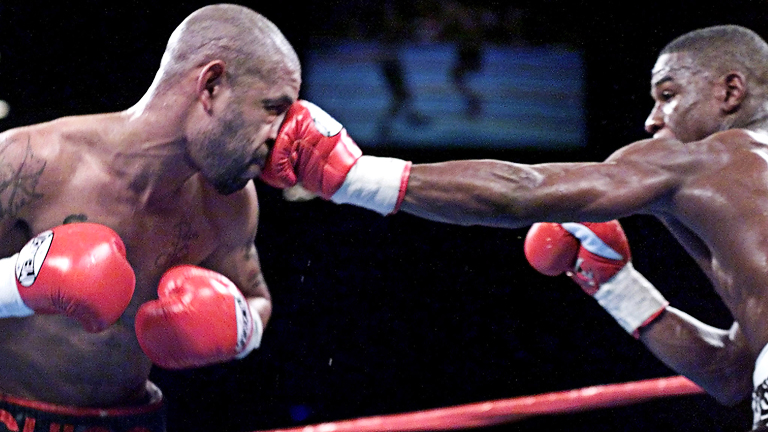 ON THIS DAY in 2001, a 23-year-old Floyd Mayweather, campaigning as a super-featherweight, met tall gunslinger Diego Corrales. What followed was, some experts say, Mayweather’s finest performance.

The anticipated thriller took place at The MGM Grand in Las Vegas, and “Pretty Boy,” as Mayweather Jnr was then known, defended his WBC super-featherweight title against the big-hitting warrior known as “Chico.”  The expected tough night for Floyd did not materialise. Instead, the bout turned out to be a one-sided beat-down in the favour of the unbeaten master from Grand Rapids, Michigan.

Sporting a 24-0 record, Mayweather shone like never before. The tall and ultra-dangerous Corrales was coming off an impressive third-round stoppage of Angel Manfredy, and the undefeated 22-year-old  who was 33-0 had won six of his last seven by KO. The former IBF 126-pound ruler (title never lost in the ring), was widely expected to give the flashy, superbly-skilled Mayweather his toughest test yet. Some fans even went further, comparing the upcoming fight to the 1981 welterweight classic between Sugar Ray Leonard and Thomas Hearns. Instead, though we saw a classic performance, no great fight was witnessed.

What we saw one man’s utter dominance over another at the highest level of the sport. Five times in all the freakishly brave Corrales hit the man – only to get up and fight back, or try to fight back, on each occasion. Corrales never won a round all night, and in the end, after the fifth knockdown, in the tenth-round, Diego’s corner threw in the towel. As was his warrior nature, Corrales went all-but berserk, chewing out his corner for coming to his rescue.

In actuality, though, Corrales was saved for another day. On this night he was never going to beat Mayweather. Of course, to this day, no man has bested Mayweather, but back when he was making a very good fighter look incredibly ordinary, Mayweather was busy meeting and defeating the best around. Today, some critics say the number-one fighter on the planet is guilty of “cherry picking” his opposition.

That accusation is another article altogether. But when Mayweather was willing to risk his perfect record against dangerous and risky punchers like Corrales, “Money” showed he is more than capable of rising to the occasion.

Since January 20th in 2001, Mayweather has claimed titles up at lightweight, light-welterweight, welterweight and light-middleweight compiling an overall 50-0 (27) ledger. However, some say he has never looked better than when he was chopping down Chico.

As for Corrales, he went on to engage in some fantastic wars; his 2005 epic with Jose Luis Castillo being a fight that will never be forgotten. Sadly, he left us far too young, when a motorbike accident took his life in 2007. Then aged just 29, Corrales’ final ring record reads 40-5 (33).