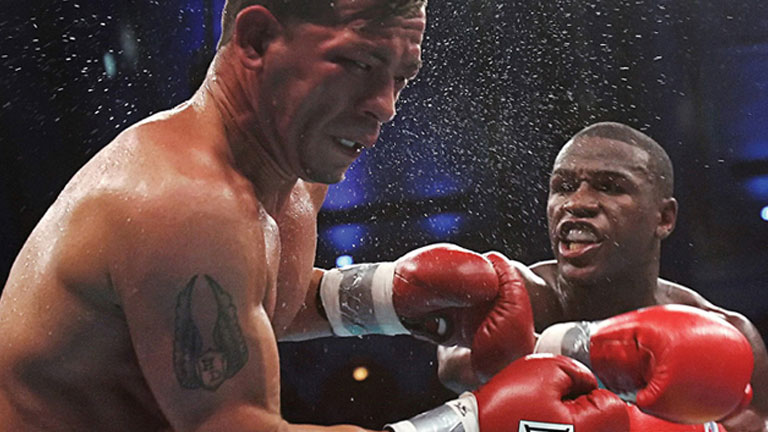 UNBEATEN Floyd Mayweather vowed to “punish” Arturo Gatti and that’s just what he did, on this day (June 25) in 2005. Gatti pulled out at the end of the sixth, following a brutal beating.

“He was just too fast,” moaned Gatti, whose left eye was slammed shut while losing his WBC light-welterweight title.

“He was a tough guy, a strong guy, but he never laid a hand on me,” said Mayweather, who after winning his third ‘world’ title dropped to the canvas and cried in jubilation.

Beforehand, Mayweather had dismissed Gatti as nothing but a club fighter and was nearly as cruel with his mouth as with his fists. Once the first bell rang, however, Floyd backed up his boasts. He was brilliant.

Oozing confidence and class, he opened with a thudding left jab that landed with the speed of a laser. Mayweather, now 34-0 (23), missed with a wild left hook, but Gatti was already wary and just waved his left in lieu of a jab.

Gatti’s stance was also very wide, which negated his punching. Arturo apprehensively crouched and might as well have been wearing handcuffs and a ball and chain.

The capacity crowd of 12,675 at the Boardwalk Hall began to chant “Gatti, Gatti,” but it was more a fervent plea than anything. With less than a minute gone, this fight was over, even the most ardent Gatti worshipper knew it.

Both moved slightly in the centre of the ring when Mayweather ripped another slashing left hook and Gatti’s craggy face was quickly reddening.

Gatti (10st) tried to be the aggressor but was much slower. Mayweather was easily out of range before his rival could retaliate.

Late in the first, Mayweather mauled Gatti to the ropes and tore off a right uppercut to the chin and left hook to the head. Gatti looked at referee Earl Morton in protest, as if he expected Morton to caution Floyd for hitting on the break.

Morton shook his head and Gatti had stupidly dropped his hands. Mayweather raced in and uncorked a fast left hook to the head and Gatti sagged slowly to the canvas. “Your’e supposed to protect yourself at all times,” insisted Mayweather later. “The ref let us fight…”

Gatti quickly got to his feet, but his heart didn’t seem in it. Luckily for him, there was just 13 seconds left in the round.

“Nothin’ to worry about, stick to the game plan.” Said trainer Buddy McGirt between rounds. But McGirt alibied later, “That knockdown messed up our game plan.”

Mayweather (9st 13lbs) was even more confident by the second. Gatti charged at him, only to be jarred by a left hook. Arturo kept trying to box when he wanted to fight and Mayweather thumped him with a fast three-punch burst.

Floyd was so fast, so good, it was a surprise when Gatti even landed a long left hook to the body. A little later, a left-right-left jolted Gatti when he turned away. He was red and swelling under both eyes.

Suddenly, Mayweather exploded with a big right. Poor Gatti didn’t have a prayer. When Mayweather nailed him with a thudding left hook, the crowd let out a long “ohhhhh”.

By the third it was obvious there should have been a change in strategy. McGirt kept badgering Gatti and yelping, “stick to the game plan”, but the only way Gatti had any sort of chance was to fight.

He had to get inside and rough up Mayweather, it worked well for Jose Luis Castillo.

By the middle of the third, Mayweather was so amazingly quick, Gatti was busting up. Floyd was cruelly fast with each hand and refused to stay in the pocket. He simply beat up the brave Gatti with single shots.

The crowd began another chant of “Gatti, Gatti…” but he was well on his way to the slaughterhouse and everybody knew it.

Mayweather continued his painstaking beating in the fourth. A cracking right to the jaw hurt Gatti, then a blinding burst knocked him off balance.

Arturo shot a hopeful jab but Floyd replied with a left-right counter and began knocking chunks out of him with five and six-punch salvos.

Gatti, a Canadian based in Jersey City, New Jersey, haplessly twirled his left in the fifth, when he should have been viciously hooking. He did dig a hard hook downstairs as Mayweather missed with a couple of flurries.

Arturo was still paying a big price for staying on the outside, but Mayweather looked as though he might be slowing a bit. The referee barked at the young challenger, “Don’t put your forearm in his face.” That just roused the emotional Mayweather, who slammed a withering right to the body and right to the head.

Floyd showed such wonderful reflexes, his fists were a blur as they pounded body and head. And there were nearly 13,000 witnesses to this mugging.

Gatti fired a desperate right that missed and two more short, fast rights contorted his face at the bell.

Floyd jabbed, moved and ducked to open the sixth while the hapless Gatti got nailed by a fast right lead that stopped his illusory rally. Suddenly, Mayweather opened up and his marvellous young fists thudded into Gatti again and again. Gatti nearly went down.

This proud old warrior continued getting tormented and pounded. He wasn’t even good sparring. Another fast right to the jaw sent Gatti’s head flying. He was getting hit with everything

Maybe Mayweather didn’t stick around long enough to sustain his attack, but at one point four right hands crashed off Gatti’s head, leaving him dazed. Near the bell, a wicked right uppercut to the chin nearly dropped him, but Gatti wobbled to his corner and collapsed on his stool.

“I’m stopping it,” bellowed McGirt, “Eye’s closed…” Gatti was in such dire shape that one of the gutsiest fighters in the history of the game could barley whisper a protest. He’d taken such a systematic beating that he’d be wise to pack it in. But he is going to fight on at welterweight.

He made $3.5m for this while Mayweather got $3.1m, but when it came to lumps and bruises, there was nothing close at all.

Mayweather, who can be an arrogant, unlikeable kid, was booed into the ring as he was carried on a platform by “Roman centurions”.

Likeable or not, give Mayweather his due: boxing has a new “Caesar” and it’s Floyd Mayweather, the best fist fighter on the planet.