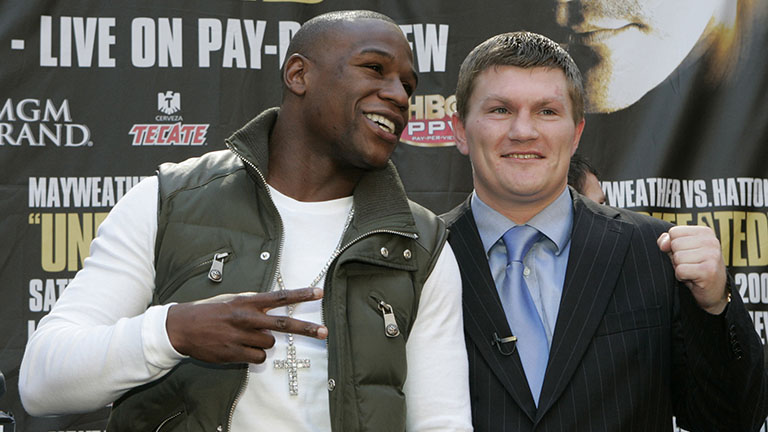 TODAY (December 8) marks the 10th anniversary of when Ricky Hatton fought Floyd Mayweather in Las Vegas. In this week’s issue of Boxing News magazine Declan Warrington speaks to Floyd Mayweather, Ricky Hatton and all the key players involved in that event. Here is an exclusive extract:

“He was a superstar very few people liked,” Hatton, then 29, told Boxing News.

“He was very cocky; very brash. But it was made to be the success it was [despite being at 5am it sold a then-record 1.2million Pay-Per-Views in the UK]. It was perfect. I thought Floyd lost his first fight to Castillo, so when I knocked him out in four: I knew it was always going to be big, but I don’t think we’d seen anything like it, and I don’t think we’ve seen anything like it since.

“It was the 24/7, and going to Los Angeles, Las Vegas, New York, Michigan, London, Manchester. You’re flying there on your own private jet. I don’t know if it was for the camera: every press conference he was in my face. By the end of the press tour it was getting tedious and I was thinking ‘Will you just p**s off?’. I’d be in restaurants and he’d come in and throw $100 bills on the table, ‘I’ll pay for your meal, man’. He was a f*****g pest.”

To read the full inside story from Floyd Mayweather’s famous  10 round victory at the MGM Grand, including Mayweather’s exclusive take on the event, don’t miss this week’s issue of Boxing News magazine.