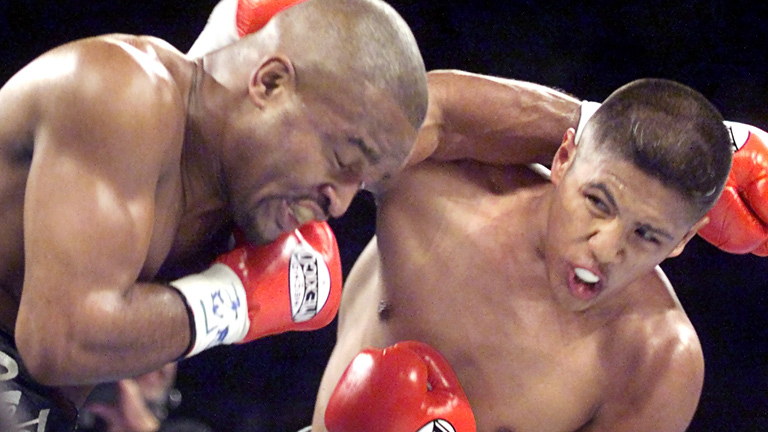 1.WHAT started out as a routine defence for IBF light-middleweight champion Fernando Vargas against Ross Thompson escalated into a grudge match as their August 26, 2000 scrap approached. The challenger – a hefty 15-1 underdog – took offence to Vargas’ earlier comments stating he had never heard of Thompson. “Who is this guy?” the champion asked.

2. THOMPSON, the undeserving mandatory challenger, boiled over at the final press conference two days before the fight. After labelling the unbeaten star “all hype”, “overrated”, and a “bum”, he launched across the table in an attempt to punch him. He was then knocked off the platform by a counter left hand from Vargas. Thompson was raging. He flew back on stage and fired a shot at promoter Gary Shaw that drew blood.

3. “YOU don’t have to worry about this guy,” quipped Shaw to Vargas afterwards, “he couldn’t even floor me.” The Nevada Commission fined Thompson $10,000 for losing his rag, and the pair weighed in separately on the eve of their Las Vegas scrap at Mandalay Bay.

4. VARGAS entered the ring with fierce determination burning through his eyes, and with Mike Tyson by his side. The champion refused to touch gloves immediately before the bell, and fired a wicked – albeit inaccurate – left hook immediately after it sounded.

5. DUE to the newfound grudge, there was a stifling sense of anticipation among the 5,327 fans in attendance as the fight began. New Yorker Thompson – a previous loser to Adrian Stone, Oba Carr and James Page – leapt from his feet in an effort to nail his enemy, but with his arms recklessly loose, disaster loomed.

6. THOMPSON landed a nice right to the body in the second round but his own momentum swung him off balance as he missed with a left hook. The challenger was a three-time national amateur champion, and usually boxed patiently, but it was clear his hatred for his opponent had ruined any pre-fight game plans.

7. VARGAS was penalised by referee Joe Cortez for hitting and holding in round three. The reprimand awoke the beast within, and Vargas steamed forward, pulping Thompson’s hopes as he went. Thompson emerged from a knockdown hoping to avoid further punishment but Vargas hounded his challenger with a six-punch volley that put his rival down again. Desperate for destruction, the champ prowled the ring as the bell sounded and had to be hauled to his own corner by his team.

8. IT was all over in the fourth. Thompson was still foggy when the session began and lost his feet beneath a savage left-right. Vargas’ temper was hanging by a thread as he leaned over his stricken rival and launched spit globules. The distasteful action persuaded Thompson to rise, and groggily scream at his tormentor. It was his final act in the grudge. Vargas quickly concluded matters, as Thompson collapsed again under a frenzied attack that demanded Cortez to step in.

9. “WHO’S a bum now?” Vargas repeatedly bellowed as he celebrated victory on the shoulders of his supporters. Later, and with tempers cooled, the winner insisted he had been in control of his emotions throughout. “He said I was nothing, that I was a chump, but this chump can fight a bit.”

10. IN his next bout Vargas lost a titanic unification showdown with Felix Trinidad before punishing defeats to Oscar De La Hoya, Shane Mosley, and Ricardo Mayorga forced him in to retirement at the age of just 29. Thompson rose steadily through the weight classes following the Vargas defeat, losing far more than he won, and weighed a whopping 250lbs for his final contest – a 2011 reverse to Nicolai Firtha.