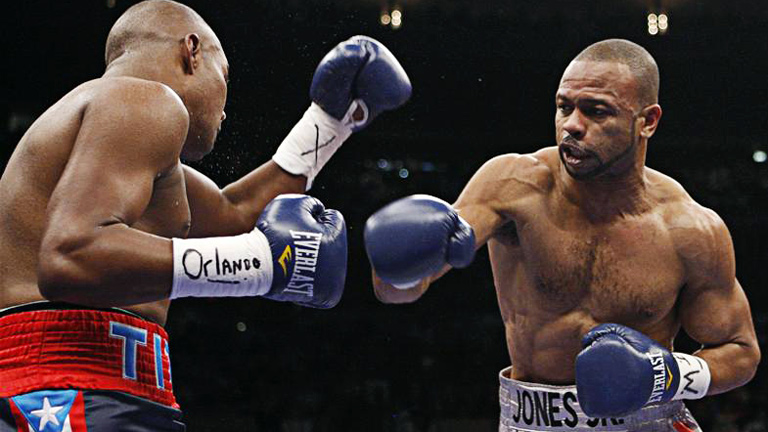 ON This Day in 2008 the great Puerto Rican Felix “Tito” Trinidad entered the ring in for the last time in a losing effort to Roy Jones Jnr.

Trinidad, a three-weight world champion who was inducted into the Hall of Fame last year, was widely outpointed by Jones in his final fight at his home away from home, Madison Square Garden, losing 119-107, 116-110 and 116-110 on all three scorecards.

It was only “Tito’s” fifth fight since 2001, and the first time he would step between the ropes in two-and-a-half years following a lopsided decision loss to Ronald “Winky” Wright in a WBC eliminator.

The Puerto Rican remains one of the greatest fighters of the 90’s, with devastating power which was there for all to see during his remarkable reign as IBF welterweight champion, however he was way past his best – like Jones – by the time this fight occurred.

In a card billed as “Bring on the Titans”, both hardly entered the ring in sparkling form. Jones had lost his last three big fights, getting knocked out by Antonio Tarver and Glen Johnson, as well as losing a return with Tarver, but was on a two-match winning streak, after points win over the unheralded pair of Prince Badi Ajamu and Anthony Hanshaw.

Nevertheless, in his understated way, promoter Don King announced that the fight between the decorated pair was a “dream match” and “the most remarkable thing out of my 40-year career”. The clash was set at a 170lb catchweight without a title on the line, marking it as the only time Trinidad ventured towards the light-heavyweight limit.

“Tito” started quickly and aggressively, probably taking the first two rounds, but Jones took control in the third and his confidence began to grow as the rounds went on, taunting Trinidad in the sixth and showing no effect from the Puerto Rican’s assault to the body.

A short right hook floored Trinidad in the seventh and “Tito” was down again in the 10th after another rapid combination. Trinidad survived till the final bell, but the usual cries of “Tito” that had echoed around the Garden were no more as he fell to one last defeat.

A crowd of 12,162 saw the fight live and it generated nearly $25 million in domestic television revenue, but the fight is not one that will linger long in the memory, especially for Trinidad fans.

He now holds his own place in Canastota at the Hall of Fame and is one of the greatest fighters to come off the boxing-mad island. As for Jones, he went on to lose his next fight to Joe Calzaghe and is still optimistically pluggin away.