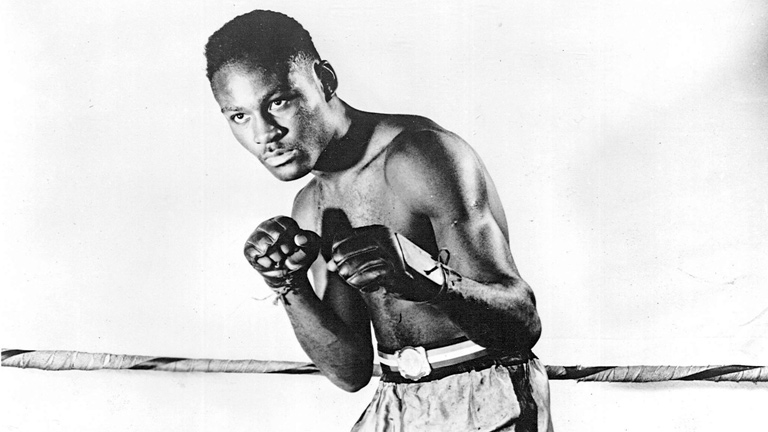 WHAT HAPPENED: The Ring Magazine reported: “Charles won the first two rounds, lost the next two, and then won the next three. They set a terrific pace…. Midway in the eighth round, Moore caught Charles with a terrific left hook and followed his advantage…. Charles was definitely on the verge of a kayo… but, to the surprise of everyone, he snapped out of his dazed condition, landed a volley of left hooks and then a perfect right cross.”

The Associated Press said: “A crashing left and right dumped Moore to the floor. He struggled around on one knee trying to rise immediately and Charles then applied the finisher, another right. Moore grabbed feebly for the ring rope as Referee Jackie Davis finished his toll of 10, but couldn’t reach his feet again for some 20 seconds–and then only with the help of his handlers.”

WHAT HAPPENED NEXT: With the victory, Charles retained his mandatory status with the NBA and remained at light-heavyweight for his next four bouts, beating the excellent Elmer Rey and Jimmy Bivins. However, he was moved towards the vacant world heavyweight title and in late-1949, he outpointed Jersey Joe Walcott for the championship made available by Joe Louis‘ retirement. He would reign until 1951 when Walcott beat him in his eighth defence. . . . FULL CHARLES BIO HERE

Moore, meanwhile, would go on to become history’s most revered knockout king – scoring more inside the distance finishes than any champion before or since. In 1952 he would dethrone 175lb world champ Joey Maxim, and keep the title until 1961. In between, he found time to make several runs at heavyweight glory, only to be thwarted against Rocky Marciano and Floyd Patterson. . . . FULL MOORE BIO HERE